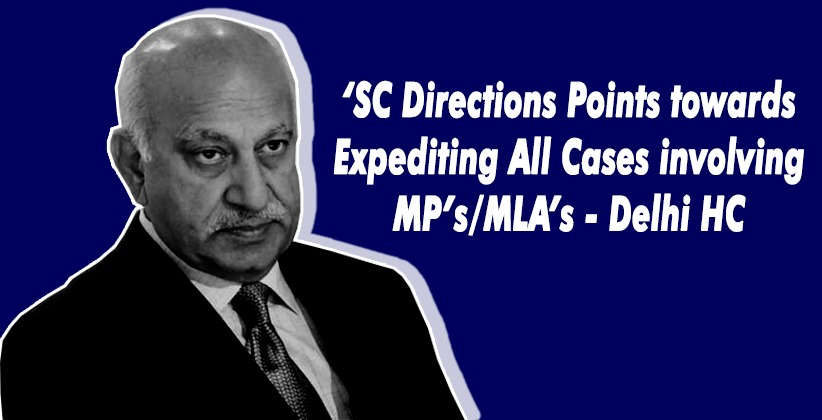 The Delhi High Court recently denied transferring the criminal defamation case of MJ Akbar in another court. The matter came before the court when the Additional Chief Metropolitan Magistrate told both the parties of the case that it is no more competent to try the case.

The ACMM said this because of the directions passed by the Supreme Court in Ashwini Upadhyay case in which it was stated that the special court for MP/MLA cases can only hear matters which are filed against the legislators and not by the legislators.

While denying the transfer of case the court noted that the Supreme Court's directions in Ashwani Upadhyay case refer to expediting all cases involving legislators, and not just cases filed against them.

Senior advocate and counsel for MJ Akbar, Ms. Geeta Luthra opposed the transfer of case and contended that “Going by the underlying object of the said order of Hon’ble Supreme Court i.e. to clear the names of the MP/MLAs involved in any criminal cases or in any accusations of moral turpitude, the said case also deserves a priority to be tried by a designated Court.”

She further contended that “even though the word used in the notification, is, with respect to cases pending ‘against’ MP/MLAs, however, literal interpretation should not be given to the word ‘against’ and it should be read ‘involving’ or ‘with respect to’.”

The District and Session Judge Sujata Kohli observed that there is a little difference between the SC’s direction in the Ashwani case and the notification of Delhi High court.

The difference is that the SC’s direction includes the word ‘ involving’ and the Delhi HC notification includes that only that cases will be entertained that are ‘against’ the legislators.

The court for SC’s direction said that, “the emphasis is on the cases involving MP/MLAs and nowhere, it is the intent, that it is only the cases against the MP/MLAs which should be within the purview of the designated courts.”

Further, the court said, “Applying the settled legal principles above discussed in detail, to the order of Hon’ble Supreme Court in ‘Ashwani Kumar Upadhyay v. UOI and Anr.’ case, it is very clear that the underlying object appears to be that the names of the MP/MLAs involved in any criminal cases should be cleared away fast and the decisions should be rendered expeditiously, either way, so as to remove the blot/shadow against the name and reputation of an MP/MLA while he sits in Parliament/Assembly if it is clearable.”

The court finally said, “adopting a wider view of the notification and in the light of the order of Hon’ble Supreme Court in ‘Ashwani Kumar Upadhyay v. UOI and Anr’ (supra), and treating the case as involving the name and reputation of an MP, I am of the considered view that the matter should be tried and disposed of by the designated court itself.”