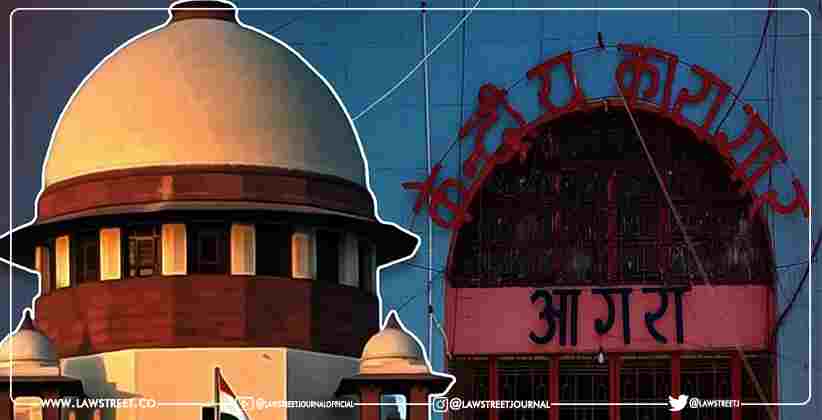 The Supreme Court on Thursday (July 8, 2021) granted interim bail to 13 prisoners who have languished in Agra Jail for 14-22 years despite proving their juvenility at the time of the commission of the offense. “It is not in dispute that 13 petitioners have been held by Juvenile Justice Boards as juveniles. Let interim bail be granted to them by presenting personal bonds,” the court ordered. [Tikam Singh & Ors v. State of U.P]

A Bench of Justice Idira Banerjee and Justice V. Ramasubramanian passed these orders while hearing a writ petition which highlighted the “very unfortunate and sorry state of affairs” in Uttar Pradesh, where many prisoners continue to languish in jail despite proving their claim of juvenility.

The petitioners moved the Apex Court seeking to highlight the unchallenged rulings from Juvenile Justice Board wherein the petitioners have been declared juveniles with clear findings that they were all below the age of 18 years, yet no steps have been taken to release them.

Advocate Rishi Malhotra, appearing for the petitoners submitted that it is unfortunate that despite a clear and unchallenged categorical order declaring these petitioners as Juvenile, the petitioners are languishing in Agra Jail having undergone custody ranging from 14 years to 22 years.

In 2012, the Allahabad High Court while entertaining a PIL had noted that there were many prisoners who were languishing in different jails in the State of Uttar Pradesh who were juvenile and passed directions to hold an inquiry by the concerned Juvenile Justice Board for determination of their age as on the date of the respected incident. As per the directions of the High Court, Juvenile Justice Board held and inquiry which revealed that as many as 13 prisoners who were languishing in Agra Central Jail were below the age of 18 years during the commission of the offence and held them juvenile as per the Juvenile Justice (Care and Protection) Amendment Act, 20006.

According to the petition, “ A bare perusal of Section 7(a) of Juvenile Justice Act 2000 for a claim of juvenility to be raised before any court at any stage even after final disposal of a case and Section 20 of the Juvenile Justice Act 2000 enables the court to consider and determine the juvenility of a person even after conviction by the regular court and also empowers the court, while maintaining the conviction to set aside the sentence imposed and forward the case to Juvenile Board is made.”

Referring to a decision given by a three judge Bench in 2012 in the case of Abuzar Hussain v. State of West Bengal [2012 (10) SCC 489], Advocate Rishi Malhotra argued that a delay in raising the ground of juvenility could not be a reason to let them languish behind bars for years. The claim could be raised even at the stage of advanced appeal before the Supreme Court.

He further stated that though in majority of the cases their statutory criminal appeal are pending before the High Court against their conviction under various IPC offences, but the necessity and the need of the hour is to immediate direct release of these petitioners in view of the fact that not only there are declared juvenile but they have already undergone a maximum period of detention under Section 15 read with Section 16 of the Juvenile Justice Act 2000 viz 3 years.

Advocate Garima Prashad appearing for the State of Uttar Pradesh submitted that interim bail can be granted to the petitioners but individual facts needed verification and sought two weeks time to file a counter-affidavit.

“The Allahabad HC had passed orders to identify the ones who had passed the age of juvenile. We have no objection with bail, but we need to conduct verification,” the counsel said.

The plea also alleged that there is a clear infringement and violation of the fundamental right of the petitioners envisaged under Article 21 of the Constitution in, the prisoners are actually undergoing illegal detentions as on date and prays for the immediate release of the petitioners in light of the Juvenile Justice Board Order.