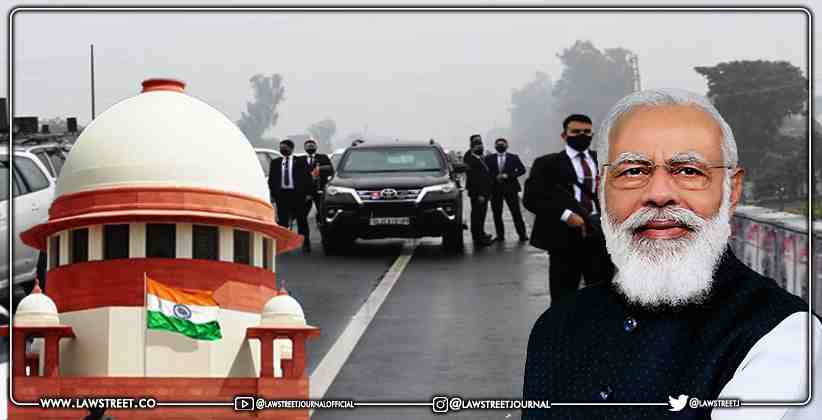 Sr Adv Maninder Singh: I assume the Registrar General has submitted some report

CJI: We received a compliance report last night at 10 pm

Singh: then we can take it up day after tomorrow

CJI: Where the state Advocate General?

Sr Adv DS Patwalia: the records have taken into record by the registrar general. Regarding allegations against the judge, there is nothing in SC judgment. Be that it as it may, there is some politics in it.

Patwalia: 7 show cause notices have been issued to the SSP as to why action should not be taken against them. no opportunity of hearing has been given to me..where has this showcause notice come when proceedings were halted. I will not get justice from central govt committee.

Patwalia: there needs to be an independent probe.

CJI: Read the show cause notice

Patwalia: show cause notice to the state chief secretary... where it says there it appears prima facie violation of responsibilities bestowed under the SPG Act and not ensuring smooth VVIP travel

Patwalia: show cause notice premediates and assumes everything against us. 24 hrs given for reply... i dont expect a fair hearing at all. there needs to be an independent probe

SG Tushar Mehta: these notices were issued before your order

SG: We need to apprise you about the law under which this applies. Let me point this out. there is certain misconceptions going around. Let me screenshare

SG Mehta screen shares: Convoy of PM had reached the place which was 100 m from the protest area..as per the blue book it would be incumbent upon the officers that the rules are strictly implemented and state govt should direct such officers so that there is minimum inconvenience

SG: Crowds have to be properly controlled by judicious employing use of forces. there was no intimation to the convoy that there was crowd gathering.. protectee had to be immediately be shifted if there is a perception of threat

SG: There was complete intelligence failure. In some case DG and CS travel with the PM so that there is no communication system breakage and it has to be ensured that there is a clear road and if a blockade is there the vehicle is stopped...4 or 5 kms ahead of it.

SG: Very fact that the state is defending them is very very serious. The central govt committee had to examine where did this lapse take place.

SG: The basis of this show cause notice is that there is a provision in blue book that director general and intelligence officials are responsible. there is no dispute about this. there was no prewarning about blocakde,..if rules say DGP is responsible then its as per blue book

Justice Surya Kant: yes there is a breach and state has too admitted it. but the other issues are question of facts and it has to be seen by an independent persons.

SG: Other than DGP.. Since they are responsible under the rules

Justice Kohli: when you issued the notice it was before our order and after that we passed our order. you asking them to reply in 24 hours is not expected of you

CJI: if you want to take disciplinary action against the state officers then what remains for this court to do

SG: This cannot be decided by the state... let the committee members comprising of cabinet secretary, DG SPG etc look into this and report in 3 weeks

CJI: If the main issue of putting the blame on someone is over... then what do we do?

SG: This case of PM Security, the central govt officers should be allowed to examine

CJI: pls dont be under the impression that we are not taking this seriously

Judges mute to discuss among themselves

SG: If you feel the show cause notice pre-empts the final outcome, the committee of central govt examine the issue and report to court and till then the committee will not act upon the notice. I think this is the fair

CJI: We are on the limited extent of conducting the enquiries..

Patwalia: the central govt committee consists of three members, one is cabinet secretary, then IG SPG and the director of IB. MHA head is heading this and they are of prima facie opinion that I am guilty already

Patwalia: let the independent committee be appointed. i have no hopes from this committee. with what face will I be going before the committee.

CJI: Let us discuss, mute us (to court officers)