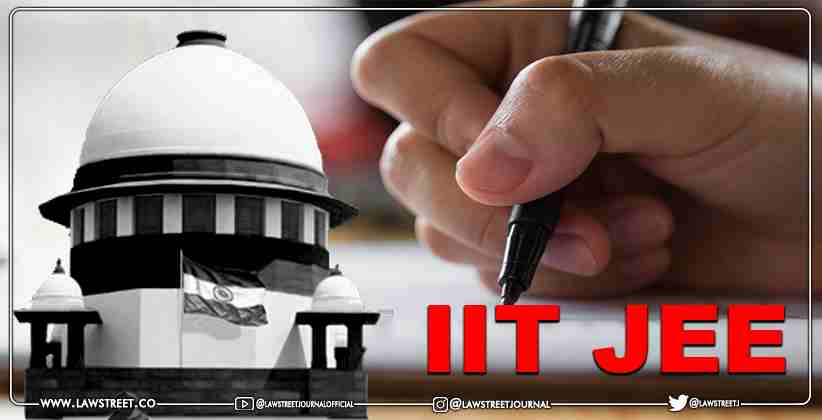 An appeal was filed by the IITs against the judgement of the High Court in the Supreme Court in which the Apex Court held that condition which is the 5th Criterion of Information Brochure of JEE (advanced) 2020 as a valid condition.

A petition before the High Court was filed by Soutrik Sarangi whose application for JEE (Advanced) was rejected based on the fact that he had been given admission in IIT-Kharagpur in the year 2020.

The observation of the single -judge of the High Court was that preventing the plaintiff  from taking the exam on these grounds was illogical.  Another observation of the Judge was that the student who withdrew his admission from IIT was permitted to appear for JEE, however, a student who was competent enough to secure his admission in the esteemed institution was not allowed to appear.

This kind of rejection according to the Judge was “hostile discrimination” and arbitrary.

JURISDICTION OF THE SUPREME COURT

IIT appealed to the Supreme Court without availing their option of letters patent appeal before the division bench, which was used as an objection by the opposition.

The Apex Court while overruling the preliminary objection of appealing directly in the Supreme Court held that the rule of necessity according to which the litigants are supposed to avail all the appellate remedies before approaching the Supreme Court is a rule of convenience, however, it is not an immutable practice.

Furthermore, the Court held that Article 136 of the Indian Constitution has enough scope and flexibility to correct glaring errors.

The Counsel on behalf of the IIT held that Criterion 5 under which the student has been prevented from taking the JEE(Advanced) is included after various considerations, and it has been added to fulfil two primary objectives, the first objective is to prevent any kind of wastage or blockage of seats and secondly to enable students to participate again in the subsequent year if eligible so that they could  improve their performance and take admission in the esteemed institution.

The Counsel further added that they cannot allow the other student to take the admission since he did not withdraw his admission last year, because if he had withdrawn his admission then his seat could be given to another eligible candidate.

Furthermore, they stated that this particular criterion was added five years ago and the candidate was well aware of the same while he had filled the form for participating in the entrance.

OBSERVATIONS OF THE SUPREME COURT

The Supreme Court disapproved the view of the High Court and observed  that the Criterion was added after various “extensive consultations” among CBSE ( Central Board of Secondary Education), IITs and various other officials of the Union Government.

The Court emphasizing the judgement passed by Justice Ravindra Bhat held that in matters involving the criterion of admissions and other such matters which include the academic institutions, the judicial review by the Court has to be done in a wary and cautious manner.

The Court held that due to this limitation where the Courts cannot take decisions in place of the expert bodies of these academic institutions the judgement of the High Court for characterizing Criterion 5 of the IITs cannot be supported.

Furthermore, the Court held that they cannot get involved unless the rejection for admission is absolutely discriminatory or arbitrary.

CLASSIFICATION BETWEEN IITs AND NON-IITs IS WARRANTED

The rationale given by the Supreme Court for upholding Criterion 5 of the IITs and disapproving the observation of the High Court that the Criterion is discriminatory between the IITs and non-IITs as they allowed the students enrolled in non-IITs to appear for the exam is that the JEE (Advnanced) is governed by rules and regulations under the while the other non- IITs were not governed by any act and therefore, the IITs were allowing the students who had taken admission in any other institution which was not an IIT to appear for the Exam.

The Court held that Criterion 5 is valid and it aims at preventing the wastage of a valuable public resource, which means the seats at IITs.

Therefore, the Court set aside the Judgement of the High Court and dismissed the Writ petition by the student.