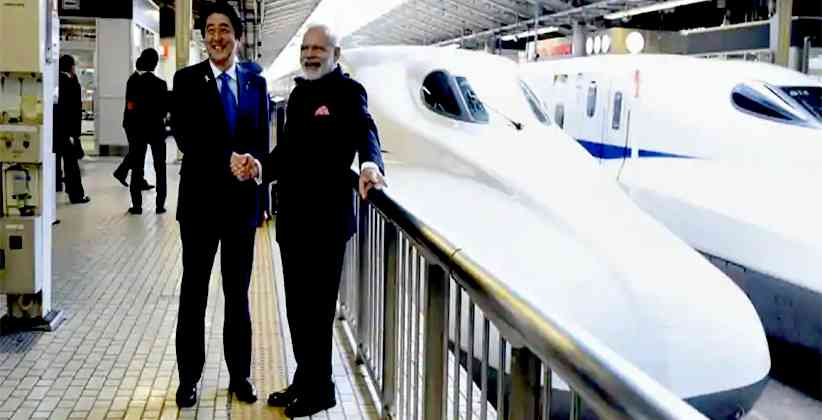 The Supreme Court agreed today (January 17, 2020) to hear petitions filed by farmers to halt land acquisitions for India's first Bullet Train rail project to be set up between Mumbai-Ahmedabad which will run at a speed of 320-350 kmph. The Court will hear the matter on March 20, 2020. The decision of the court might delay the 508 kms long project. After rejection of the petition filed in the Gujarat High Court which had refused to declare land acquisitions as illegal as alleged by farmers, they moved the Apex Court.

A Division Bench headed by Justice Deepak Gupta of the Supreme Court is hearing the matter.

On September 18, 2018, around 1000 farmers had submitted affidavits in the Gujarat High Court opposing the proposed Mumbai-Ahmedabad bullet train project.

Besides these petitioners, 1000 farmers submitted separate affidavits in the Gujarat High Court to highlight the plight of many more cultivators that were affected by the Centre's ambitious Rs. 1.10 lac crores bullet train project.

In the affidavit, the affected farmers from various districts of Gujarat, from where the bullet train route would pass, had stated that they did not want acquisition of their land for the project.

Pointing out to the existing land acquisition proceedings, the farmers said that it was contrary to the guidelines of the Japan International Cooperation Agency (JICA) that had provided a soft loan to the Indian government for the $17 billion project.

Further, the farmers alleged that the Gujarat government diluted the Land Acquisition Act 2013 after Japan entered into a contract with India for the bullet train in September 2015.

They told the court that the government didn’t take their consent nor consulted them before initiating the land acquisition. Moreover, the social impact assessment for rehabilitation and resettlement was never discussed by the government.

The bullet train project was launched in September 2017 by Prime Minister Narendra Modi and his Japanese counterpart Shinzo Abe.

For the project, around 1,400 hectares of land was supposed to be acquired in Gujarat and Maharashtra; 1,120 hectares of which is privately owned. Around 6,000 land owners would have to be compensated.