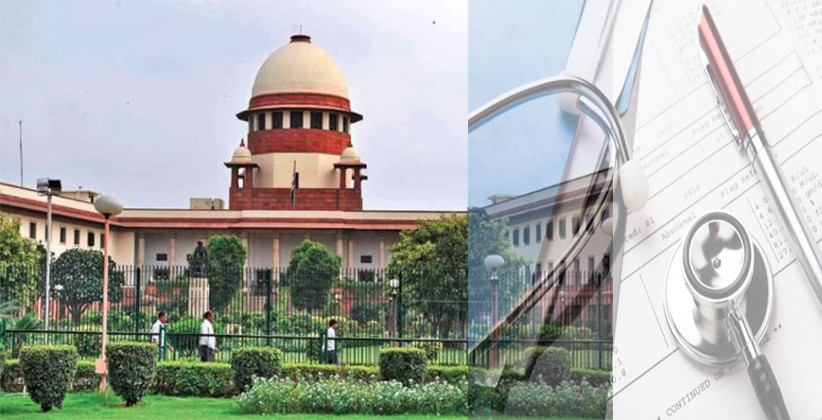 The Supreme Court on January 17, 2019, in the case of Sarvepalli Radhakrishnan University & Another v. Union of India & Others has imposed a penalty of Rs 5 crore on R.K.D.F. Medical College Hospital and Research Centre for playing fraud on it.

A Bench comprising of Justices S.A. Bobde, L. Nageswara Rao and R. Subhash Reddy on hearing the matter ordered the prosecution of college Dean SS Kushwaha under Section 193 of the Indian Penal Code, 1860, and also barred the medical college from making admissions for the 1-year MBBS course for the next two years.

Further, the court also directed the college to pay compensation of Rs 1 lakh to each student admitted in the college for the academic year 2017-18, apart from the refund amount payable to them.

The order was made following a report submitted by the court-appointed committee wherein it was revealed that the medical college was guilty of practicing fraud on the court by manufacturing records to show that they were being unnecessarily hounded by the MCI in spite of their compliance with the required standards. It also noted that the college indulged in large-scale malpractices in showing compliance of the minimum required standards to obtain permission for admission of students.

The Bench said: “Without delving deep into the details of the Report submitted by the Committee, it is clear that the College is guilty of practicing fraud on this Court. The conduct of the College administration in indulging in manipulations and hoodwinking the authorities to project compliance of the requisite minimum standards for admission of students does not deserve to be condoned. The impunity with which the College has manufactured records to convince us that they were being unnecessarily hounded by the MCI in spite of their compliance with the required standards is deprecated. The brazen attempt by the College in taking this Court for a ride by placing on record maneuvered documents to obtain a favourable order is a clearcut act of deceit. The justification given by the College regarding the absence of certain residents has turned out to be a concocted story. Had we not initiated an enquiry by the Committee of Experts, the fraud played by the College on this Court would not have come to light.”

Thus taking in view the facts and circumstances of the case, the court said that “It is trite that every litigant has to approach the Court with clean hands. A litigant who indulges in suppression of facts and misrepresentation is not entitled for any relief. The conduct of the College in this case to mislead this Court for the purpose of getting a favourable order is reprehensible and the College deserves to be dealt with suitably.”