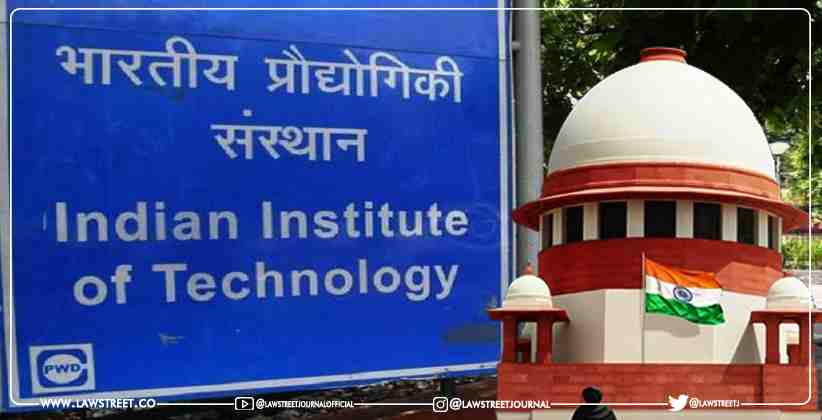 On Wednesday, 24 November 2021, the Supreme Court issued notice to the Centre and IITs in a writ petition seeking directions to all twenty three IITs to follow the reservation policy in the research degree program as well as in the recruitment of faculty.

The said matter was listed before the bench of Justice LN Rao, BN Gavai and BV Nagarathna.

The petition filed by Dr. Sachchida Nand Pandey ( geothermal energy researcher) through Advocate Ashwani Kumar Dubey alleged that the reservation to socially marginalized community belonging to the SC(15%), ST(7.5%), OBC(27%) categories are to be followed by the IITs. It was argued that the process of taking admission in the research program as well as the appointment of faculty members by the IITs was completely unconstitutional and arbitrary.

"As IIT's are not following transparent process for recruitment of the faculty members and opening window for non-deserving Candidates which will increase the chances of corruption, favoritism, and discrimination." the petition stated.

In June 2008, it was submitted in the petition that the Central Government had written to IIT Directors (at Kharakpur, Bombay, Madras, Kanpur, Roorkee and Guwahati) to implement the reservation for SC's and ST's and OBC categories in requirement to a teaching post at Assistant Professor Level in Science and technology and at all levels.

Further in November 2019, the Government of India had extended reservation to all posts (Associate professors and professors) including technical for Faculty positions.

The petition stated that the IITs however, were compelely violating the reservation policy.

Dr. Sachchida Nand Pandey in the petition had also sought for directing the Union of India to make mechanism and to resolve the problem faced by Students/Scholars and to decide research harassment complaints with transparency.

It also demanded for directing the respondents to constitute a committee of technical experts to review the performance of existing faculty and cancel the appointment of non-performing faculty and for not following the reservation policy, and also suggested for formation of transparent recruitment policy.