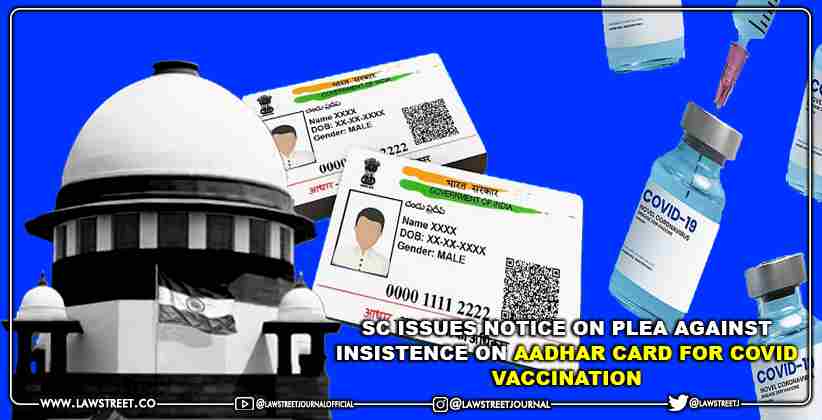 The Supreme Court issued notice on Friday ( October 1,2021), on a writ petition asking the Centre not to insist on the production of an Aadhaar card as the only form of identification for the purpose of administering COVID-19 vaccination.

Justice D. Y. Chandrachud stated at the outset, "Don't base your decision on what you read in the newspaper. Have you recently seen the COWIN App? It is now up to date. Go to the FAQ section to see if there are any new ID proofs that you can use to register."

"The Aadhaar card is not the only form of identification accepted. You can also register using a driver's licence, PAN card, voter's ID, passport, ration card, and other documents. We will keep this matter under wraps until you can verify it for yourself," he told the petitioner's attorney.

Thee petitioner's advocate, however, pleaded, "Yes, you can use any of the seven IDs to register. However, when you go there for vaccination, the insistence on Aadhaar remains! Apart from that, they said, we couldn't do anything! The policies are in place, and everything on paper is in place, but people are still facing this issue! The Aadhaar link is still required! "Even the Meghalaya High Court had to intervene and grant the order that I am requesting!"

The bench then issued a notice of hearing on the writ petition.