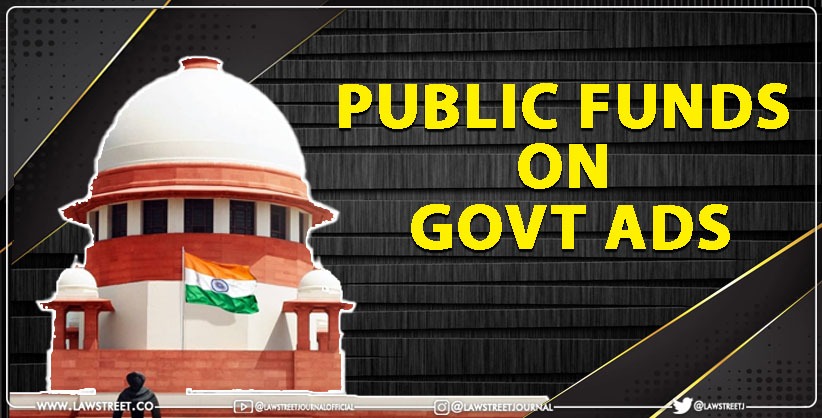 NEW DELHI: The Supreme Court on Monday issued a notice to the Centre and States on a plea to prohibit governments from using public funds on issuing  advertisements in ways which are completely malafide, arbitrary, and in breach of trust, besides being in violation of the top court's guidelines issued in 2015.

A bench of Justices D Y Chandrachud and Hima Kohli sought a response from the Centre and States on plea by NGO 'Common Cause'.

The NGO was represented by advocates Prashant Bhushan and Cheryl Dsouza.

They sought an order to prohibit state governments from publishing advertisements outside their territory, except when they are doing it to invite stakeholders to the state for business summits/conclave or attract tourism, and private investments.

The plea said this court in its judgment on May 13, 2015, in 'Common Cause vs Union of India' had issued several guidelines aimed at regulating government advertisements in order to check the misuse of public funds by central and state governments.

However, the governments have now devised ways and means through which advertisements are being published and rolled out thereby effectively failing the very objective behind the judgment.

The plea contended rolling out advertisements outside the territory of the state is disproportionate, unreasonable, not need-based, arbitrary and does not amount to obtaining maximum value for the taxpayer’s money, all of which are clear violations of the guidelines formulated by the apex court.

The petition also sought a direction prohibiting the publication of government advertisements in the form of advertorials.

“Several governments across the country are publishing advertisements in the form of ‘advertorials’ that are, by their very nature, designed to be deceptive and misleading, are against all journalistic ethics and therefore give rise to serious constitutional concerns and equally raises ethical and moral questions,” the plea said.

It also sought an order prohibiting the publication of government advertisements atleast three months prior to elections and barring publication of photographs of elected public functionaries.

The NGO said allowing government advertisements to be published during the run up to elections is undemocratic, prone to severe misuse and creates a highly unequal playing field for various parties, big and small, contesting in the election.

Allowing government advertisements to be published before elections strikes at the very concept of free and fair elections which is a hallmark of any democratic society and has been recognised as the basic structure of the Indian Constitution by this court in the case of ‘Indira Gandhi vs Raj Narain’ (1975).

Further, the Committee on Content Regulation of Government Advertisements (CCRGA), as it exists today, is designed to work subservient to the central government. This makes the committee biased, effectively forcing it to take actions only selectively. That the committee lacks transparency makes the situation even worse. These are clearly against the intent of the judgment of this court in Common Cause (2015) case.