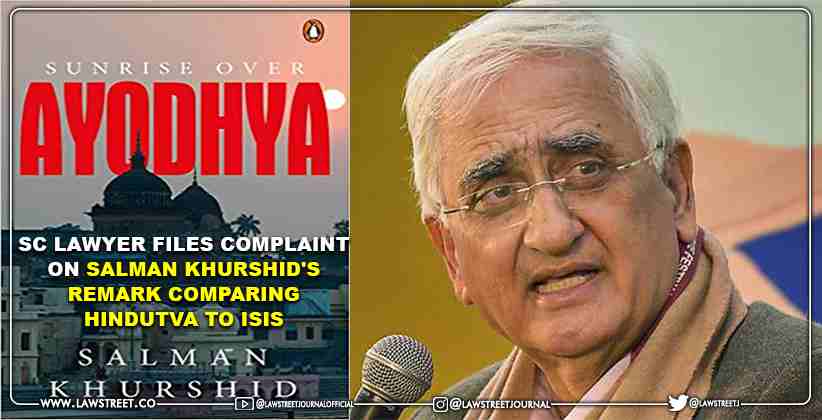 In his book Sunrise over Ayodhya: Nationhood in Our Times, which was released on Wednesday, Khurshid referred to Sanatan Dharma and classical Hinduism known to sages and saints “being pushed aside by robust version of Hindutva, by all standards a political version similar to the jihadist Islam of groups like ISIS and Boko Haram of recent years.”

“In Mr. Salman Khurshid’s new book, we may not agree with Hindutva as a political ideology distinct from composite culture of Hinduism, but comparing Hindutva with ISIS and Jihadist Islam is factually wrong and an exaggeration,” he said.

The BJP lashed out at Khurshid. Union minister Pralhad Joshi said, “Sonia Gandhi, Rahul Gandhi and Priyanka Gandhi are desperately trying to appease Hindus by touring temples. I would like to ask them- when and what action will they take against Salman Khurshid who have insulted the beliefs of Hindus?”

Party spokesperson Gaurav Bhatia said the Congress was “weaving a web” against Hindus. “All this happens at the behest of Sonia Gandhi and Rahul Gandhi. Earlier the term Hindu terrorism was invented in the Congress office,” he told reporters.

The Shiv Sena, which runs a coalition government with the Congress in Maharashtra, also condemned the book.

He said, “I have not called these guys terrorists, I have just said they are similar in distorting religion. What Hindutva has done, it has pushed aside Sanatan Dharma and Hinduism and it has taken over a robust, aggressive position similar to Boko Haram and those other guys.”

On Azad’s remarks, he said, “Exaggeration means it is somewhat like them. That’s what he feels. Distortion is done by Boko Haram and distortion is also done by Hindutva. I said we disagree with Hindutva, and so I think Azad and I are on the same side.”

A Delhi-based lawyer also filed a complaint with Delhi Police seeking registration of FIR against Khurshid.