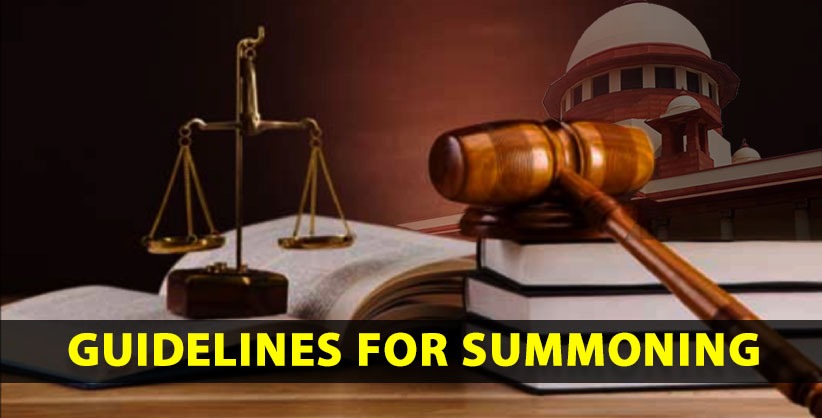 NEW DELHI: In an important judgement, the Supreme Court on Monday laid down broad guidelines for the court to follow in summoning of the additional accused either suo motu or an application by the prosecution on the basis of fresh evidence or materials disclosed during the trial.

A five-judge Constitution bench presided over by Justice S Abdul Nazeer declared that the trial court can invoke its extraordinary power under Section 319 of the Criminal Procedure Code to summon additional accused even before the pronouncement of the order of sentence in case of conviction of other accused.

The bench, also comprising Justices B R Gavai, A S Bopanna, V Ramasubramanian and B V Nagarathna, said the trial in a criminal case is completed only after the sentence is pronounced in case of conviction, as "a judgment is considered to be complete in all respects only when the sentence is imposed on the convict".

"If the court finds from the evidence recorded in the process of trial that any other person is involved, such power to summon the accused under Section 319 of CrPC can be exercised by passing an order to that effect before the sentence is imposed and the judgment is complete in all respects bringing the trial to a conclusion," the bench said in 45-page judgement.

Justice Bopanna, who authored the judgement on behalf of the bench, said, "What is important is that the decision to summon an additional accused either suo-moto by the court or on an application should in all eventuality be considered and disposed of before the judgment of conviction and sentence is pronounced, as otherwise, the trial would get concluded and the court will get divested of the power under Section 319 of CrPC."

The court also declared the power to summon the accused can certainly be invoked in split up or bifurcated case, where some accused remained absconding and apprehended subsequently, before conclusion of the trial therein.

"But the evidence recorded in the main concluded trial cannot be the basis of the summoning order if such power has not been exercised in the main trial till its conclusion," the bench said.

The court's judgement came on a reference made a two-judge bench on May 10, 2019 in case of Sukhpal Singh Khaira, saying that the question with regard to the actual stage at which the trial is said to have concluded is required to be authoritatively considered since the power under Section 319 of CrPC is extraordinary in nature.

The question before the court came up for consideration before the top court as the decision to summon an additional accused in a drug trafficking case on the date sentence was pronounced by the trial court.

The court said the trial court has the power to summon additional accused when the trial is proceeded in respect of the absconding accused after securing his presence, subject to the evidence recorded in the split up (bifurcated) trial pointing to the involvement of the accused sought to be summoned.

But the evidence recorded in the main concluded trial cannot be the basis of the summoning order if such power has not been exercised in the main trial till its conclusion, it added.

(i) If the competent court finds evidence or if application under Section 319 of CrPC is filed regarding involvement of any other person in  committing the offence based on evidence recorded at any stage in the trial before passing of the order on acquittal or sentence, it shall pause the trial at that stage.

(ii) The Court shall thereupon first decide the need or otherwise to summon the additional accused and pass orders thereon.

(iii) If the decision of the court is to exercise the power under Section 319 of CrPC and summon the accused, such summoning order shall be passed before proceeding further with the trial in the main case.

(iv) If the summoning order of additional accused is passed, depending on the stage at which it is passed, the Court shall also apply its mind to the fact as to whether such summoned accused is to be tried along with the other accused or separately.

(v) If the decision is for joint trial, the fresh trial shall be commenced only after securing the presence of the summoned accused.

(vi) If the decision is that the summoned accused can be tried separately, on such order being made, there will be no impediment for the Court to continue and conclude the trial against the accused who were being proceeded with.

(vii) If the proceeding paused as in (i) above is in a case where the accused who were tried are to be acquitted and the decision is that the summoned accused can be tried afresh separately, there will be no impediment to pass the judgment of acquittal in the main case.

(ix) If, after arguments are heard and the case is reserved for judgment the occasion arises for the Court to invoke and exercise the power under Section 319 of CrPC, the appropriate course for the court is to set it down for re-hearing.

(x) On setting it down for re-hearing, the above laid down procedure to decide about summoning; holding of joint trial or otherwise shall be decided and proceeded with accordingly.

(xi) Even in such a case, at that stage, if the decision is to summon additional accused and hold a joint trial the trial shall be conducted afresh and de novo proceedings be held.

(xii) If, in that circumstance, the decision is to hold a separate trial in case of the summoned accused as indicated earlier;

(a) The main case may be decided by pronouncing the conviction and sentence and then proceed afresh against summoned accused.

(b) In the case of acquittal the order shall be passed to that effect in the main case and then proceed afresh against summoned accused.