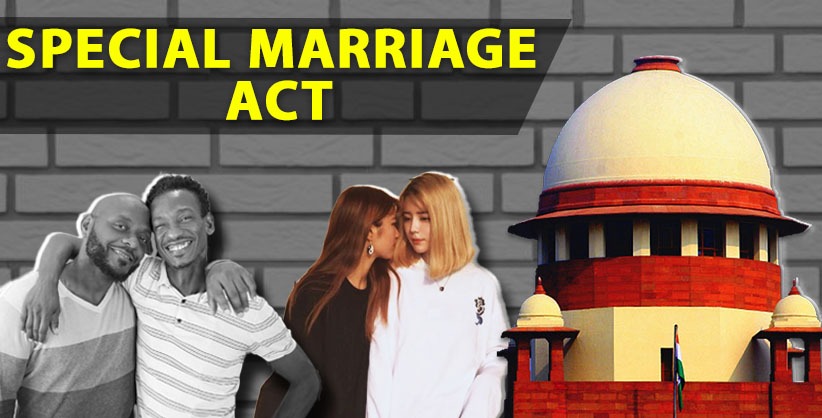 NEW DELHI: The Supreme Court on Friday sought a response within four weeks from the Centre and the Attorney General on two pleas for recognising same sex marriage under the Special Marriage Act, 1954.

A bench of Chief Justice D Y Chandrachud and Justice Hima Kohli issued notice to the Union government and A-G R Venkataramani on two petitions filed on the contentious issue.

Two petitions jointly filed by Supriyo Chakraborty and Abhay Dang, and another by Parth Phiroze Mehrotra and Uday Raj Anand came up for hearing before the bench on the contentious issue of giving sanctity to alliance between LGBTQ+ community members.

He submitted that the petitioners wanted recognition of marriage under the Special Marriage Act.

Senior advocate Neeraj Kishan Kaul also for the petitioners, relied upon the Centre's statement before the Kerala High Court in a pending matter that it was taking steps to seek transfer of similar issues before the top court.

About eight petitions on similar issues are also pending before the Delhi High Court.

Before the Delhi High Court, the Union government had opposed the same-sex alliance saying, decriminalising homosexuality has nothing to do with same-sex marriage.

It had said marriage in India is not just a union of two individuals but an institution between a biological man and woman and judicial interference will cause "complete havoc with the delicate balance of personal laws".

The petitioners contended that the Supreme Court has always protected the right of inter-caste and inter-faith couples to marry a person of their choice.

"Same sex marriage is a continuation of this constitutional journey. In the Navtej Singh Johar and Puttaswamy cases, the Supreme Court has held that LGBTQ+ persons enjoy the right to equality, dignity and privacy guaranteed by the Constitution on the same footing as all other citizens. So thereby, the right to marry a person of one's choice should extend to LGBTQ+ citizens, as well," their plea said.

They also said the legal framework governing the institution of marriage in this country does not presently allow members of the LGBTQ+ community to many the person of their choice and enforce the fundamental right which has been guaranteed to them under our Constitution, which is violative of their fundamental rights.

HC issues orders against unauthorised use of Amitabh Bachchan's persona