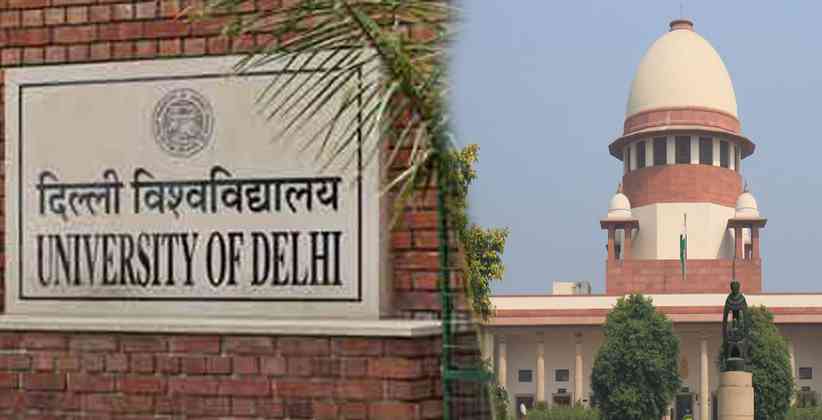 The Supreme Court on July 28 directed Delhi University (DU) to declare the examination result of a student of law whose result of the 4th and 5th semesters was kept back on grounds of lack of attendance owing to her pregnancy.

The order was passed by the apex court in the plea filed by Ankita Meena, a final year law student, who could not regularly attend classes due to an advanced stage of pregnancy in the second year.

According to the Bar Council of India (BCI), Rules of Legal Education, a minimum of 70 percent is a prerequisite to make a student eligible to sit for the final examinations. But, in exceptional cases, the Dean or Principal of the University is empowered to make such relaxations as the case may be and allow students to appear for the examination but the student must have attended 65 percent classes in each subject and 70 percent overall.

Earlier, in the year 2018, when she approached the Delhi High Court for considering her case as an exception and make attendance relaxations in her favor so that she could take the final examination. Meena was pregnant and a lot of complications arose due to her pregnancy, because of which, she was unable to attend the required number of classes, making her ineligible to appear for her final examinations according to the BCI Rules. The Delhi High Court however refused to grant her relief citing “maternity leave cannot be put in a different compartment for the purposes of relaxation of attendance.”

The court had also made it clear that LLB is a special professional course, which is governed by the BCI Rules, therefore, no such privilege can be granted to anyone who runs contrary to the BCI Rules. The High Court had referred to the decision made in the case of the University of Delhi and Anr. Vs Vandana Kandari and Anr, where it was held that the minimum percentage attendance criteria are a condition precedent in order to allow a student to appear for their Final Examinations and maternity leave cannot be put into a different compartment for the purpose of providing relaxations with regards to attendance.

Whereas Meena had relied on Rule 2(9)(d) of Ordinance VII of Chapter III of Delhi University Act, 1922, which provided that a married woman who was granted maternity leave, while computing the total number of lectures attended by a student in that particular semester, the number of lectures delivered during the maternity period shall not be taken into consideration. But rejecting the contention of the student, the High Court clarified that Rule 2(9)(d) does not cover a professional course like LL.B.

Meena had also relied upon the judgment of Air India vs Nergesh Mirza and Ors, where clauses which led to an air hostess’s retirement from her profession upon her first pregnancy was struck down as unconstitutional and was in violation of Article 14 of the Indian Constitution. It was held that reasons such as marriage or pregnancy cannot be grounds upon which an air hostess shall be removed or compelled to retire from her service. Such conditions seem discriminatory even on the basis of gender.

In the recent plea, filed in the Apex Court, where Senior Advocate Meneka Guruswamy represented Meena, had pacified that the Delhi University had kept back the examination result even though Meena had attended all the lectures of every semester, and had attempted the examinations similar to all her batch mates.

All India Bar Examination Postponed by the Bar Council of India