“Will hear only after Sabarimala is finished.” SC Said Refusing Prashant Bhushan’s Plea In Connection With Delhi Riot 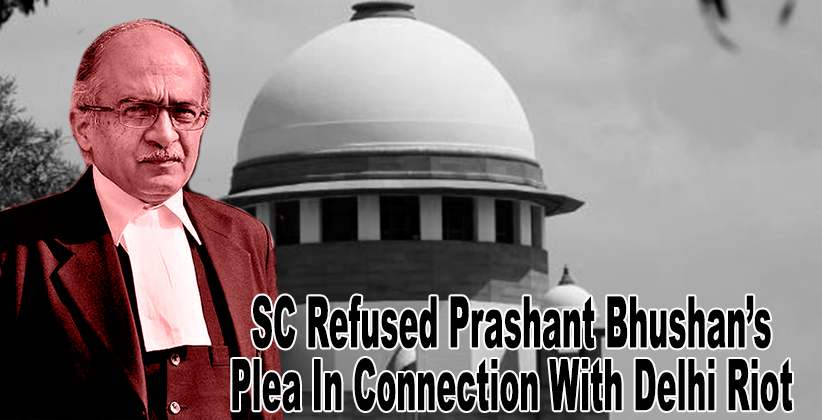 On February 28, 2020 Supreme Court bench comprising Chief Justice of India S.A. Bobde, Justices B.R. Gavai and Surya Kant denied to hear urgent plea of Senior Advocate Prashant Bhushan demanding for separate investigation of Delhi riot with different wings investigating it, other than police. But court responded that they “Will hear only after Sabarimala (hearing) is finished.”

The apex court further said the court would first hear the Sabarimala case. A nine-judge Constitution Bench has been set up to decide the extent of religious freedom under Article 25 of Constitution of India, 1950 and on what would conform as essential religious practices. It was only on February 26, 2020 that Supreme Court judge Justice K.M. Joseph, while hearing the Shaheen Bagh protest case, commented on the “lack of professionalism” shown by the Delhi Police in not stopping people from making hate speeches, which led to the Delhi riots.

“If you had not allowed people to get away after inflammatory remarks, all this would not have happened,” Justice Joseph had said.

Justice Sanjay Kishan Kaul, who was the lead judge on the Shaheen Bagh Bench, had also described the instances of communal violence in Delhi as “deeply unfortunate”.

Petitioner citing spurt violence and questioning potential of Delhi police to carry out fair investigation said, “Look at what is happening in Delhi. Policemen themselves are complicit… They are siding with rioters.”

Bhushan said that law & order is an executive function while investigation is part of criminal justice system. To corroborate this argument, he cited the similar nature of recommendation made in Prakash Singh judgment of 2006.

The Prakash Singh judgment had held that “commitment, devotion and accountability of the police has to be only to the rule of law”.

“The supervision and control have to be such that it ensures that the police serve the people without any regard, whatsoever, to the status and position of any person while investigating a crime or taking preventive measures,” the Supreme Court had held in 2006.

If the police crossed the limits of law, the guilty among them should be brought to book.

The judgment had referred to ‘Political and Administrative Manipulation of the Police’ published in 1979 by Bureau of Police Research and Development, warning that excessive control of the political executive and its principal advisers over the police has the inherent danger of making the police a tool for subverting the process of law, promoting the growth of authoritarianism and shaking the very foundations of democracy.

He insisted before the bench on an urgent hearing on the plea. The bench said, “OK. We list the matter for hearing, but after Sabarimala.”