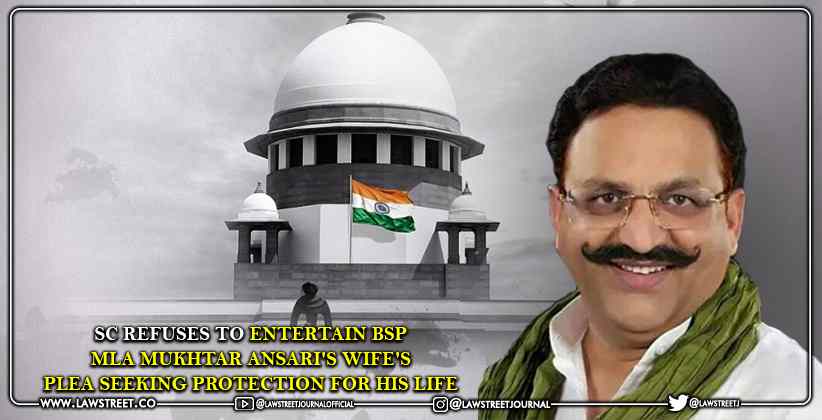 The Supreme Court today refused to hear a writ petition filed by BSP MLA Mukhtar Ansari's wife, Afshan Ansari, seeking the protection and safety of her husband's life while he remains imprisoned in Banda Jail in the state of Uttar Pradesh and attends his trial.

The bench of Justices R Subhash Reddy and Sanjiv Khanna directed Ansari's wife to file an application with the Allahabad High Court.

"The Petitioner is left with no choice but to approach this Hon'ble Court because there is a grave and immediate threat to her husband's life in the State of UP, as also noted by this Hon'ble Court in the judgement dated 26.03.2021," the petition stated.

The petition, filed by Advocate on Record Parul Shukla, also asked the Respondents in the UP Home Department, the Director-General of Police, and the Jail Superintendent, Banda Jail, UP, to ensure that the Petitioner's husband could participate in a "free and fair trial in the State and is not killed/encountered in the process."

The petition cited the Asha Ranjan v State of Bihar decision to argue that the Court had the obligation and duty to ensure a free and fair trial.

"As a result, this Hon'ble Court has mandated that fair trial in its ambit requires fairness to the accused, victim, prosecution, and the collective interest of society at large, and no one can claim absolute predominance over the other," the plea stated.

While the Supreme Court directed in its 26th March order that the custody of the Petitioner's husband be handed over to the jail authorities at Banda, the petitioner had sought adequate protection for Ansari from the designated authorities so that the trial ended in a conclusive conclusion and did not end in a State-sponsored encounter.

The plea also detailed previous attacks and threats against Mukhtar Ansari in order to demonstrate that the threat to his life was not merely apprehension but had occurred in reality.

It was also claimed that BJP MLA's Brijesh Singh and Tribhuvan Singh, along with their associates, attempted to assassinate Ansari in the past and were plotting to kill him now because he was a witness in cases in which they are defendants.

The Petitioner was "in complete fear that now any time an untoward incident can happen to her husband but for protective directions passed by this Hon'ble Court," according to the plea, which claimed that the aforementioned factors clearly portrayed the constant outside interference in Ansari's trial as well as the impending threat to his life.

The petition also referred to the Vikas Dubey case, in which the State of UP was heavily critizised, and argued that the rights guaranteed to the Petitioner's husband under Articles 14 and 21 must be protected by the Supreme Court.

It also claimed that the Petitioner had been told by some sources that "a shooter in the guise of a lawyer, along with a lawyer, will carry out the murder/ruthless killing of her husband during the course of his appearance before the Special Judge (MP/MLA), UP, and these plans are being made at the behest of some higher rank officers at the behest of the Government of Uttar Pradesh."

In light of the foregoing, the plea requested that the Respondents be given the necessary directions to ensure that the Petitioner's husband's life is protected and, as a result, his rights under Article 21 are safeguarded by video graphing his transit from one jail to another and from jail to the Court. It was also requested that he be brought before the court in the presence of CRPF/BSF officers.

'Allow Second COVISHIELD Dose After 4 Weeks from First for those who Want it Early': Kerala High Court to Centre