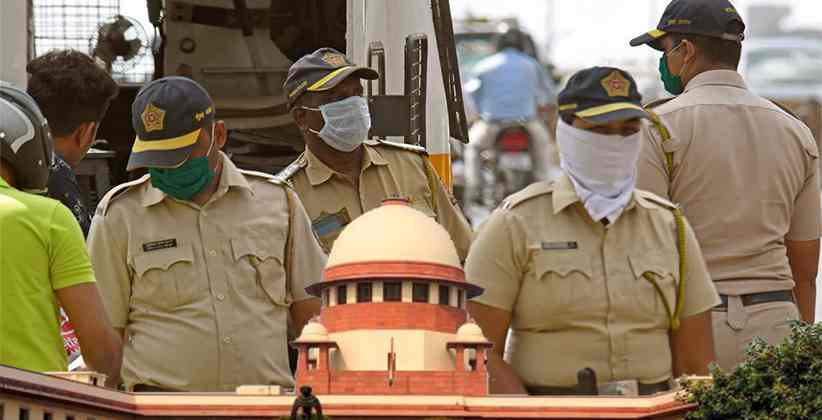 May 5th, 2020: The Supreme Court refused to entertain a plea made for the withdrawal of all governmental orders in different states that seek to cut the salaries of policemen while highlighting the issue of a lack of professional protective equipment for the said government employees.

A few states had recently taken measures to cut down the salaries provided to the uniformed and non-uniformed officers. The petition in response to the measure asked for an override of the governmental orders. The Supreme Court, however, refused to entertain the demands of the petition.

A bench headed by Justice Ashok Bhusan heard the plea through video conferencing; a measure used in many of the courts of the country to continue the judicial process in the times of the lockdown. The plea harped on the lack of protective gear for the police personals and the impact that the lack of the same can have. It also asked for PPE’s to be made available to the family members of the cops, as they are relatively vulnerable to the spread of the deadly virus from regular contact.

The petitioners emphasized the importance of the state’s personnel’s as the first line of defense in the fight against the coronavirus. The duties performed by the employees vitiated the need for proper protection from the disease; whereas the cut in their salaries will only create a situation of unnecessary frustration which may demotivate them from the performance of their duties.

The employees are currently one of the few sectors of the government performing their duties and a reduction in their salaries might cripple the nation’s fight against the disease.

The petition was filed by a retired Assistant Commissioner Of Police, BhanupratapBharge who had sought directions to the Centre and states to make provisions for the payment of ‘risk and hardship’ allowance and incentives in the form of bonus and additional salary to police officers who were presently serving on the frontline during the lockdown.

The Supreme Court; however, outrightly rejected the claims made for the said demands and while stating that they curtailed policy decisions. The court remarked that there cannot be an all-pervasive system of ruling or a super-government; and policy matters such as these do not call for action by the judiciary.

The court despite rejecting the plea highlighted the issues to the concerned authorities and asked for them to be addressed.