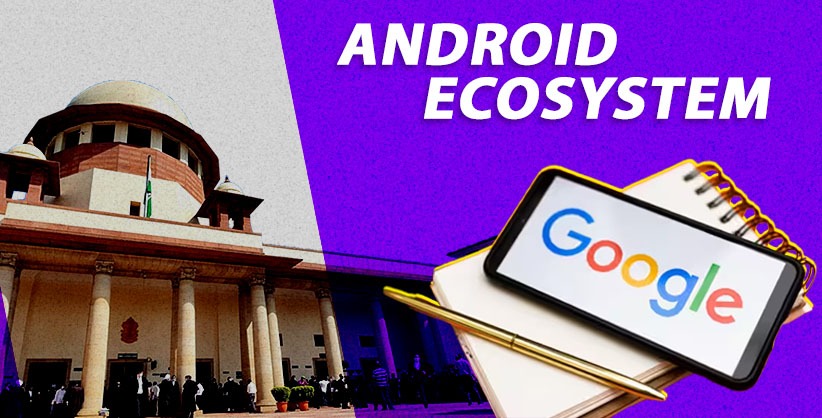 NEW DELHI: In a big setback to Google, the Supreme Court has on Thursday refused to stay the order by the Competition Commission of India which directed tech giant to make changes to its Android ecosystem and pay 10 % of Rs 1,337.76 crore penalty imposed by the CCI for alleged abuse of dominant position.

The top court, however, granted Google a week time to comply with the anti-trust’s October 20, 2022 order as the deadline ended on January 19.

"At the present stage, since the appeal is pending before NCLAT, we are desisting from entering a finding on the merits of the rival submissions which have been urged on behalf of the contesting parties. Any expression of opinion of this Court on the merits would affect the proceedings which are pending before the NCLAT. It would suffice to note that the findings which have been arrived at by the CCI cannot be held at the interlocutory stage to be either without jurisdiction or suffering from a manifest error which would have necessitated interference in appeal," a bench of Chief Justice D Y Chandrachud and Justices P S Narasimha and J B Pardiwala said.

The US form on Friday reportedly said it would cooperate with the competition authority here as the top court affirmed the National Company Law Appellate Tribunal (NCLAT) January 4 order that asked the search engine giant to deposit 10% of Rs 1,337.76 crore penalty imposed by the CCI for alleged anti-competitive practices.

"We are not inclined to stay the NCLAT order. We are resisting from evaluating the rival submissions as anything on merits would interfere with the proceedings before the NCLAT. CCI's order can not be held without jurisdiction at the interlocutory stage," the CJI said in its order.

The court asked the NCLAT President to decide the Google’s appeal against the CCI’s order expeditiously by March 31.

The NCLAT had fixed the matter for hearing on April 3, while refusing to stay the CCI’s order for “lack of urgency.”

The court allowed the parties to move the NCLAT with a certified copy of this order within three
working days.

During the hearing, the bench told Google, represented by senior advocate A M Singhvi, "All that you have goes against you. Look at the kind of authority which you wield in terms of dominance. Look at the market you hold, with that line of penetration you insist on your bouquet. But if you insist on a bouquet. You lose open source. It affects choice to consumer. With Google's market and line of penetration, why is Chrome insisted upon?"

The court also said that it cannot lose sight of the peculiarities of market here, the depth and penetration and cheap data because of the mass consumption.

Google has been claiming that it had been operating the Android mobile platform for the last 15 years and “far-reaching changes” as directed by the anti-trust order will lead to “lasting and irreparable harm” to it, device manufacturers, Indian consumers, app developers, and the wider Indian economy.

Senior counsel AM Singhvi, appearing for Google, argued that one of the CCI's direction is keeping the stable open.

He claimed there has been no investigation or finding of abuse of dominance. “If something is happening for 20 years, what will happen if there is an extension of three months. Where will Google run away,” he said, seeking stay of the order.

Additional Solicitor General N Venkataraman opposed any stay.
He said that the Competition law "democratises business and stops an feudalistic practice. Any stay will create an hurdle.”

The anti-trust order had asked the tech giant that the licensing of its Play Store should not be linked with the requirement of pre-installing Google search services, the Chrome browser, YouTube or any other Google applications. Besides, the CCI ordered Google can not prohibit uninstalling its apps by Android phone users. As of now, apps such as Google Maps or YouTube can not be deleted from Android phones when they come pre-installed.

However, Singhvi claimed, "Unlike Apple, Android is not a closed ecosystem. It is an open source. Google's MADA (Mobile Application Distribution Agreement) rules allow multiple play stores. People choosing Google isn't abuse of dominance, it is excellence. OEMs (Original Equipment Manufacturers) can decide to have Google as a pre-installed app which the user is free to uninstall.”