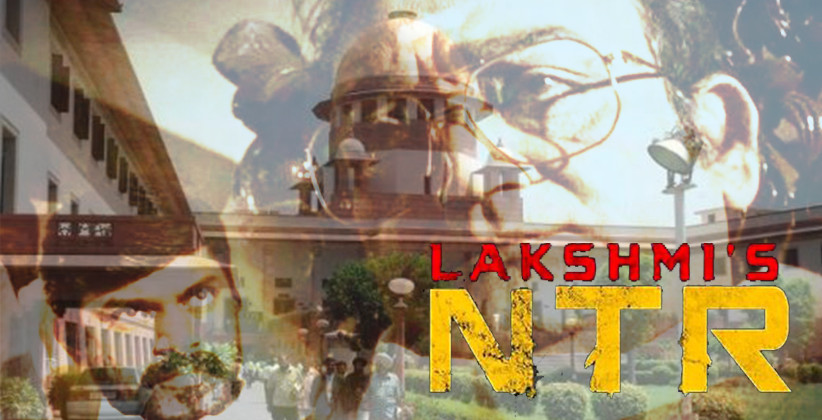 The Supreme Court today (April 1, 2019) refused urgent listing of a Special Leave Petition filed against the order passed by the Andhra Pradesh High Court in which it had put a stay on the release and exhibition of Telugu film 'Lakshmi's NTR'.

The film directed by Ram Gopal Verma is based on the life of former Chief Minister of undivided Andhra Pradesh, N.T. Rama Rao. The biopic about the legendary actor and Telugu Desam Party (TDP) founder is narrated from the perspective of his second wife, Lakshmi Parvati. The film showcases the political party’s landslide victory in the 1994 elections, the revolt and internal party coupled by NTR's son-in-law Chandrababu Naidu in August 1995 and NTR’s death a few months later. It was scheduled to be released on March 29, 2019.

However, on March 28, 2019, the Division Bench of Justices A.V. Sesha Sai and U. Durga Prasad Rao of Andhra Pradesh High Court ordered a stay on the release of the film. The Bench was hearing a PIL filed by Telugu Desam Party and its members.

In the petition, it was contended that the film was highly derogatory towards TDP. They submitted that the director of the film had raised an online plebiscite requesting the public to express their opinion as to whether the film would influence the ensuing elections.

According to the petitioners, if the exhibition of the film is allowed it would interfere with the democratic way of conducting elections in a fair and transparent manner.

Claiming that the film was a calculated move to manipulate election results, the petitioners called for the intervention of Election Commission of India to ensure free and fair elections.

Taking into consideration the submissions made by the petitioners, the High Court observed that the screening of the film at a crucial stage before the elections will affect the prospects of one political party, and held that it was necessary for the court to view the film for a "better appreciation of the contents".

Therefore, the court directed the producer to make arrangements for the screening of the film at 4PM on April 3, 2019, and stayed its release until then.

Aggrieved by the order, the producer of the film Rakesh Reddy moved the Supreme Court, contending that "Hon'ble High Court has exceeded its jurisdiction in passing the Impugned Order, as the Hon'ble Judges are not supposed to hold movie screenings and decide whether they ought to be released or not.” It was also submitted that the film has clearance from the Central Board of Film Certification.

However, the apex court declined the urgent listing of the petition. This is not the first film which has landed into legal trouble ahead of the Lok Sabha elections, other films – ‘Ram Ki Janmabhoomi’ and ‘PM Narendra Modi’ are also under the scanner for allegedly having an impactful content which could manipulate the election results.