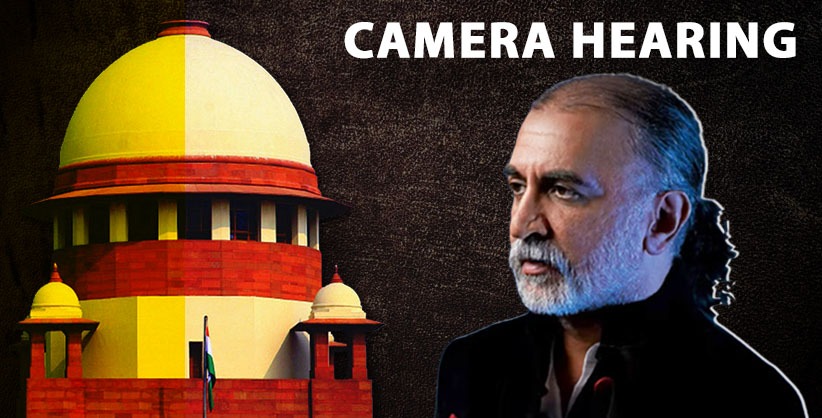 The Supreme Court on Monday declined to consider a plea by former editor of Tehelka magazine Tarun Tejpal for in-camera hearing on Goa government’s appeal against his acquittal in a case of sexual assault of his friend's daughter and colleague.

A bench of Chief Justice D Y Chandrachud and Justice P S Narasimha told Tejpal’s counsel that he cannot say that hearing on an appeal should be held in-camera.

"The accused has no right to demand it should be in-camera,” the bench said.

Senior advocate Kapil Sibal, representing Tejpal, said there are privacy rights as well as reputation of his client here.

He further added that Tejpal was acquitted and allegations were prima facie false, and also the judge said it will be an online hearing.

Senior advocate Amit Desai, also appearing for Tejpal, also contended that proceedings in the appeal should be held in-camera.

However, the bench asked if somebody who is an accused assert that the trial should be in-camera when the victim does not demand so.

Solicitor General Tushar Mehta, representing the Goa government, said the judge had revealed the name of the victim in the judgment and it is an encyclopaedia as to how the victim should behave in such situations.

The top court said that let the concerned judge take a call on the conduct of the proceedings and asked Tejpal’s counsel to make a submission before the concerned court.

The top court refused to interfere with Bombay High Court's order at Goa which rejected his application for in-camera hearing. Tejpal had moved the apex court challenging the high court order.

In its order, the top court said a communication of the registrar (judicial) of Bombay High Court has submitted that Chief Justice has directed that hearing take place virtually.

“We leave it to the high court to take appropriate decision," the bench said.

The Goa government has challenged Tejpal’s acquittal in the high court.