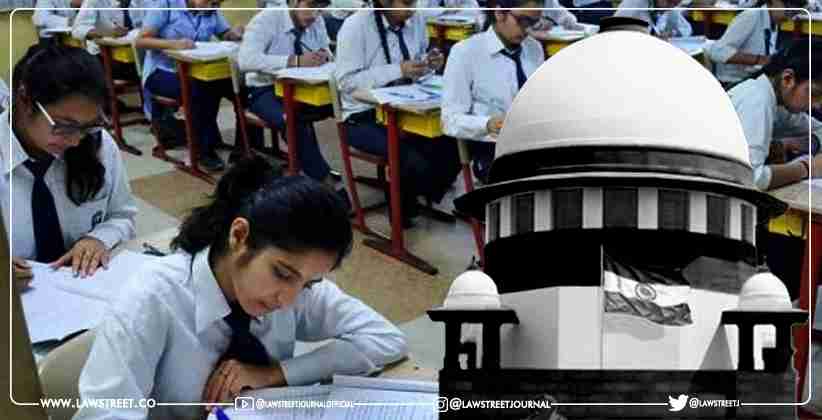 The Supreme Court on Friday (October 8, 2021), sought the CBSE's response on two writ petitions filed by Class XII students who claimed that their schools had failed to assess their results in accordance with the Court-approved 30:30:40 formula and that the CBSE had not adequately addressed their grievance.

The CBSE's counsel, Advocate Rupesh Kumar, requested more time to file a response. As a result, a bench of Justices AM Khanwilkar and CT Ravikumar adjourned the petitions until October 20,2021, asking the CBSE to file their response by then. One of the petitions was filed by advocate Pardeep Gupta.

The writ petitions raise the issue of failure to comply with the Supreme Court's directions in the case Mamta Sharma v CBSE and Ors. on June 17, 2021, in respect of the Dispute Resolution mechanism prescribed by the circular dated August 8, 2021 and the 30:30:40 formula when declaring class XIIth Results ( Cases : Urvashi Naidu v CBSE and Mohd Abraj v Holy Home Public School Nanauta Saharanpur UP and Ors).

The Petitioner Urvashi claimed that their marks were not calculated based on their actual performance using CBSE's 30:30:40 formula. However, reliance has been placed on their school's average score for the Science stream for reference year 2020 marks, and CBSE has arbitrarily deducted their marks and awarded much lower marks, causing great prejudice to them.

"The issue before this Court is whether or not the respondents are duty bound to decide the cases raised through the proper channel of Dispute Resolution Mechanism by passing a reasoned/speaking order after considering the peculiar facts and circumstances of the case instead of simply responding with a vague reply that marks have been correctly awarded in terms of the policy approved by the Supreme Court of India," Urvashi's petition states.

The petition also claims that the CBSE has failed to implement the Dispute Resolution Mechanism outlined in its circular dated August 8, 2021.

According to Mohd Abraj's petition, the students requested a detailed scorecard prepared on the basis of the 30:30:40 formula, which was upheld by the Supreme Court, but CBSE has yet to provide any information.

It has also been claimed that marks were deducted arbitrarily by the School rather than awarded to students based on their actual performance using the CBSE's 30:30:40 formula.

"Students cannot be penalized for negligence/fault/noncompliance with the School's Dispute Resolution Mechanism," the petition states.

The petitions were filed by attorneys Ravi Prakash and Mamta Sharma.

The Supreme Court bench of Justices AM Khanwilkar and Dinesh Maheshwari ruled on June 17, 2021 in a petition filed by Advocate Mamata seeking cancellation of the Class 12 CBSE and ICSE written exams while accepting the scheme formulated by CBSE and ICSE for evaluating students Boards to incorporate a provision for dispute resolution in case students want correction of the final result declared, and to provide a timeline for optional exams.