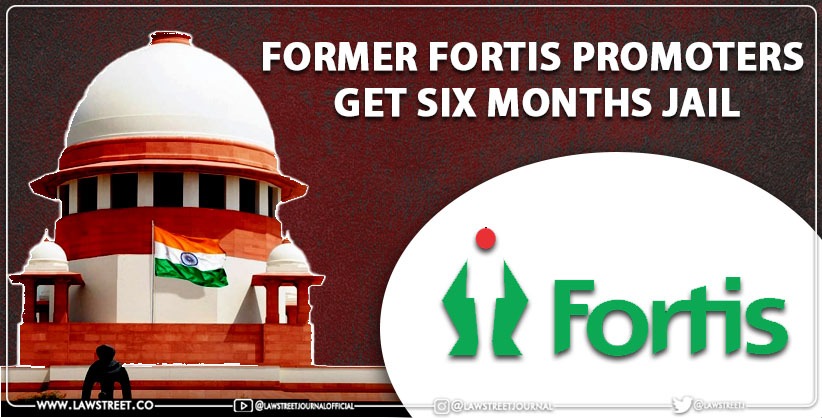 NEW DELHI: The Supreme Court has on September 22 sentenced former Ranbaxy promoters Malvinder Singh and Shivinder Singh to six- month imprisonment in a case connected with the sale of shares of Fortis to Malaysia-based IHH Healthcare.

A three-judge bench headed by Chief Justice U U Lalit refused to lift its stay on the open offer by Malaysia's IHH Healthcare Berhad for a 26 % stake in Fortis Healthcare.

The court asked the Delhi High Court to deal with the matter and also ordered a forensic audit of the Fortis-IIH deal.

The bench, also comprising Justices Indira Banerjee and S Ravindra Bhat, said, “Everything goes back to the executing court”.

The former promoters of Fortis Healthcare Ltd were involved in a court battle after Daiichi Sankyo, a Japanese firm, had challenged the Fortis-IHH share deal to recover the Rs 3,600 crore arbitration award that it had won before a Singapore tribunal against the Singh brothers.

With the ongoing legal fight between Daiichi Sankyo and the former promoters of Fortis Healthcare, the IHH-Fortis deal remained stuck.

In its order, the court also slapped the Singh brothers with a fine of Rs 5,000 each in the contempt case filed against them by a Japanese firm.

Daiichi Sankyo approached the court to enforce the arbitral award passed by a Singapore tribunal in 2016.

The Delhi High Court in January 2018, ruled that the arbitration award won by Daiichi Sankyo against the Singh brothers for concealing information about the erstwhile Ranbaxy Laboratories, was enforceable in India.

In 2018, the IHH Healthcare had acquired a 31 % controlling stake in Fortis, which triggered a mandatory open offer to acquire another 26 % of Fortis shares from the market.

However, this open offer could not materialise due to ongoing legal proceedings with regard to the transaction based on a plea filed by Daiichi Sankyo.