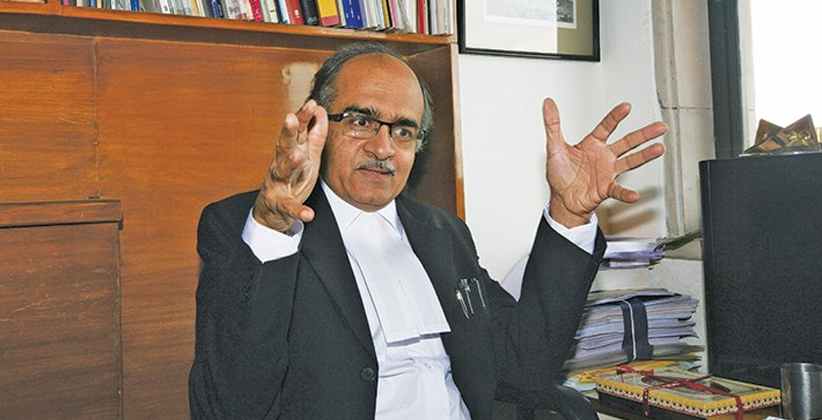 The Supreme Court on Wednesday initiated contempt proceedings against activist and lawyer Prashant Bhushan over two of his tweets that he posted on June 27 and June 29th, 2020. The court said that these had “brought the administration of justice in disrepute”.

The Supreme Court bench of Justices Arun Mishra, B.R. Gavai, and Krishna Murari issued a notice for contempt of court to activist and lawyer Prashant Bhushan to respond by August 5.

In a June 27 tweet, Bhushan had speculated on what future historians might say about the Supreme Court’s role – especially during the terms of last four Chief Justices of India – in the destruction of democracy in contemporary India, where he said an undeclared Emergency has been in force.

His second tweet, on June 29, Bhushan posted a photograph of CJI S.A. Bobde sitting on a Harley Davidson motorcycle in Pune along with the following text:

“CJI rides a 50 Lakh motorcycle belonging to a BJP leader at Raj Bhavan Nagpur, without a mask or helmet, at a time when he keeps the SC in Lockdown mode denying citizens their fundamental right to access justice!”

The bench also issued notice to Attorney General KK Venugopal and sought a reply from Twitter Incorporated, USA. It directed that the matter be listed again for hearing on August 5.

The registration of the suo motu contempt case against Prashant Bhushan stems from a petition filed by Mahek Maheshwari, an advocate based at Guna in Madhya Pradesh, seeking contempt action against both him and Twitter India.

Maheshwari had termed Prashant Bhushan’s other tweet, posted on June 29, as “inhuman” especially when, according to Maheshwari, the CJI and the other judges had been sacrificing their vacations and using video conferencing to satisfy the litigants.

The bench of Justices Arun Mishra, B R Gavai and Krishna Murari, which began hearing the matter Wednesday, said: “We are, prima facie, of the view that the aforesaid statements on Twitter have brought the administration of justice in disrepute and are capable of undermining the dignity and authority of the Institution of Supreme Court in general and the office of the Chief Justice of India in particular, in the eyes of the public at large.”

The bench also issued notices to Twitter Inc (and not Twitter India, as the court had impleaded earlier), which was allowed to file an application in the case. Earlier, Twitter Inc’s senior counsel, Sajan Poovayya, promised the bench that it would disable Prashant Bhushan’s controversial tweet if ordered by the court.

While taking up the matter for hearing, the bench also took note of another tweet by Bhushan on June 27 regarding the judiciary which it said was published Wednesday in The Times of India.

“We take suo motu cognizance of the aforesaid tweet also apart from the tweet quoted above and suo motu register the proceedings,” the bench said.