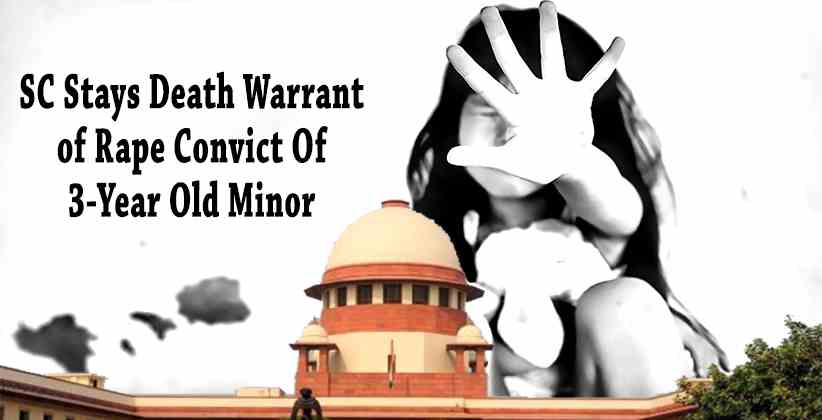 The Supreme Court on February 20, 2020, stayed the death warrant against convict Anil Yadav for the rape and murder of a 3- year old in Surat.

The bench comprising Chief Justice SA Bobde and Justices BR Gavai and Surya Kant, while cancelling the death warrant issued by the Gujarat HIgh Court, stated that fallacies in judicial processes were unwarranted and the requisite mandatory limitation must be followed.

Senior Advocate Aparajita Singh, counsel for the convict asserted that the mandatory limitation period for filing an appeal must be traversed before a death warrant is issued.

The Apex Court, in Shabnam v. Union of Indiaheld, “the execution of the death warrants within six days of the dismissal of the Criminal Appeals is challenged as illegal and contrary to the provisions of Article 21 of the Constitution of India.”

Singh submitted that there is a mandatory waiting period of 60 days by law which must be followed in order to challenge the conviction under death penalty. However, in the present case, the warrant was issued in 33 days after passing the sentence.

"We want to know as to how such orders issuing black warrants are being passed by the trial court despite a reported judgement in this regard. Someone has to explain this. The judicial process cannot be allowed to happen like this," the bench said.

The bench also sought assistance of Solicitor General Tushar Mehta and asked him to find out reasons for issuance of such death warrants despite the Apex Court's judgement.

The law officer said the ignorance of law cannot be grounds for judges to pass such orders. The prosecution had, during the trial sought death penalty against Yadav for counts of murder, unnatural sex and an attempt to destroy evidence citing the brutality involved in the crime committed in October, 2018.

A POCSO Special Court in Surat had convicted Anil Yadav and passed a sentence of death penalty. The Gujarat High Court further upheld the decision of the trial court.