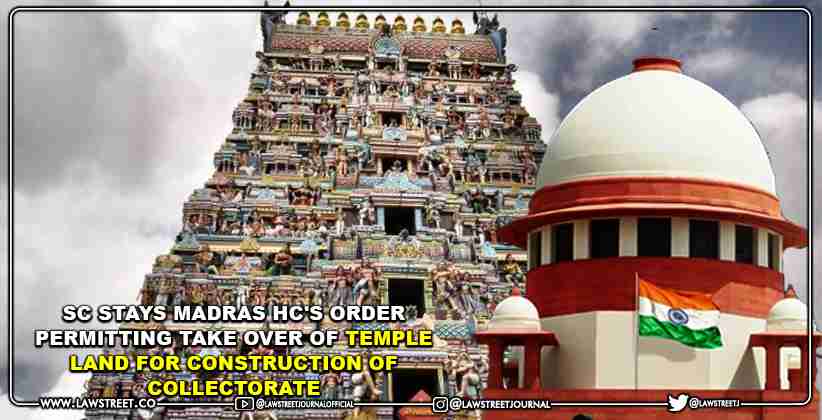 The Supreme Court stayed the implementation of a Madras High Court order allowing the State Government to lease 35 acres of Nareeswarar Temple land in Veeracholapuram for the purpose of constructing a collectorate for the Kallakurichi district on Friday (September 17, 2021).

To protect the interests of the Saivite Temple and its properties since the original trustees were deposed in 1998 and the state's Hindu Religious and Charitable Endowments Department had done little for the temple's up liftment, renovation, and maintenance, the petitioner (Rangarajan Narasimhan) had approached the High Court against the State's proposal to use the land for district headquarters.

Narasimhan also claimed that the de facto acquisition of a large portion of temple land violated Section 34 of the Tamil Nadu Hindu Religious and Charitable Endowments Act, 1959, and that such de facto acquisition ran counter to G.O.Ms.No.79 issued by the State's Housing and Urban Development Department on May 4, 2017.

The Madras High Court bench of Chief Justice Sanjib Banerjee and Justice Senthilkumar Ramamoorthy observed that the establishment of a district collectorate for the purpose of local governance on land belonging to any religious shrine donated by any good Samaritan could be justified as being for the greater public good.

"There is no doubt that the temple in the current case may not be in immediate need of funds, except for the purpose of restoration, and, in any case, there may not be any urgency in the temple looking for anyone to use its land in exchange for a monthly or yearly rent, given that the temple has been largely non-functional for several decades. However, the larger sentiment behind the establishment of a temple by any spiritually inclined person, or the intention behind donating land to a temple, must be seen," the bench said.

"At the end of the day, temples and other religious shrines are almost always built for the benefit of worshipers." If the concept underlying every religious shrine is deconstructed, the use of such land for a public purpose that brings governance closer to the local residents may appear to be philosophically compatible. To ensure the constitutional aspiration of local self-governance and to bring governance closer to the residents, larger districts have been subdivided into smaller districts, so that governance is no longer centralized in the state capital or the far-flung headquarters of the district, but is brought closer to home in the villages and taluks," it further added while stating, "To that end, if a district collectorate must be established for the purpose of governance at the local level on land belonging to any religious shrine donated by any good Samaritan, it may be justified as being for greater public good."