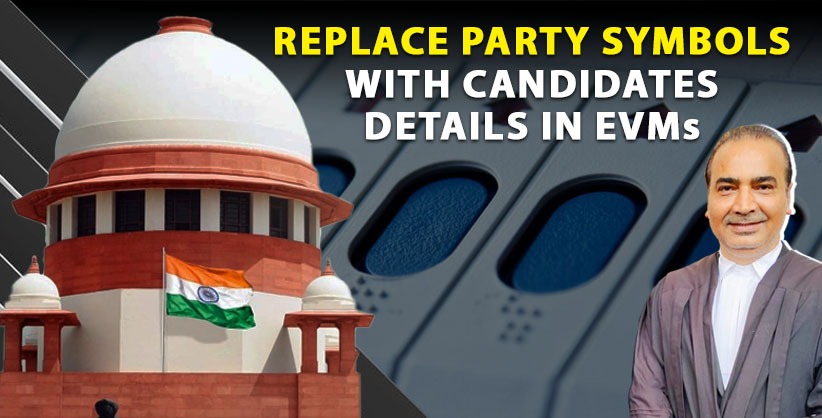 NEW DELHI: The Supreme Court is set to take up on October 31 a PIL to declare use of party symbol on EVM is illegal and unconstitutional and issue a direction to the Election Commission to use the name, age, educational qualification and photograph of the individual candidates.

A bench presided over by Chief Justice U U Lalit would on Monday consider the petition filed by advocate Ashwini Kumar Upadhyay.

He said the best solution to weed these out is to replace political party symbols on the ballot and EVM with name, age, education qualification and photograph of the candidates.

"Proposal is vital because democracy and rule of law depends upon the character competence and integrity of the legislators. People like Dr Rajendra Prasad, Sardar Patel, Dr B R Ambedkar, SP Mukherjee, Ram Manohar Lohia, Deendayal Upadhyay, C Rajagopalachari, Jagjivan Ram and Rafi Ahmed Kidwai are still there in every State and wish to serve the nation but political parties dont give tickets," his plea said.

The petition filed through advocate Ashwani Kumar Dubey contended that the facts constituting cause of action accrued on July 1, 2019 and continued when the petitioner came to know that 43% MPs have criminal cases.

Thus, there is an increase of 109% in the number of Legislators with declared serious criminal cases since 2009, it added.

"Use of party symbol on EVM, breaches the rights guaranteed under Articles 14-15 read with Articles 325-326 of the Constitution as it prevents free exercise of right to vote due to use of money power by candidates, affects ordinary citizens rights to get elected and puts him to great disadvantage due to reduced winnability factor as independent. Further, the use of party symbol on EVM is arbitrary and irrational because it invites and enables persons with criminal backgrounds to buy ticket from national and state recognised political parties and contest election.

"The functions performed by legislators are vital to democracy and there is no reason why they should be at lower standard than IAS, IPS and Judges. Candidates for judgeship certainly would not be considered at all, if they are looters or criminals. If the legislator, who has to make good laws and amend the Constitution, is involved in corruption, crime, casteism, communalism, linguism, regionalism and nepotism, then he would be disastrous for country and society," the plea said.

Upadhyay also said legislators have multidimensional role to perform in our democratic system, therefore it is need of the hour to set minimum qualification and maximum age limit for them.

The petitioner also said the legislators should have minimum qualification and good knowledge because it helps them to make the right decisions for development of society.

Minimum education should be compulsory for contesting polls. In today's world, even electrician, fitter, driver, helper, constable peon, clerk requires a minimum qualification, so why not, for those who carry enormous responsibility of developing the nation, he asked.