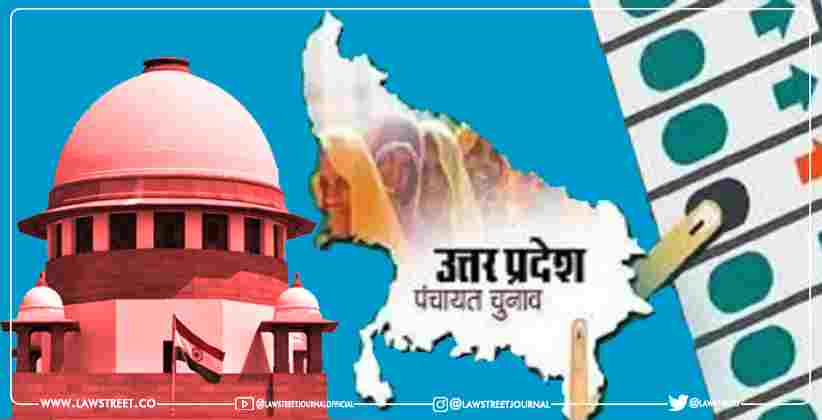 Judiciary Apr 20, 2021 Shreyas Nair ( Editor: Ekta Joshi ) 9 Shares
9 Shares
A petition has been moved in the Supreme Court against the order of the Allahabad High Court allowing the Uttar Pradesh Gram Panchayat Raj Election to continue amid the rising numbers of COVID-19 cases.

The petition reads, “It is relevant to state that till (April 16, 2021) State of Uttar Pradesh is everyday observing highest record-breaking single day surge in cases of the COVID cases. The surge has absolutely paralysed public life and all the medical aid systems have reached to a stage of complete saturation.”

According to Sachin Yadav's petition, the State Election Commission has been ordering state government employees to report for preparation, which, according to the petitioner, is not being kept with proper social distancing. The petitioner requests leave to appeal, as well as a stay on the Allahabad High Court order authorizing the election to proceed and a deferral of the polls until the situation in the state returns to normal. The petitioner further asks for the state's remaining election phases to be postponed until the State Election Commission receives advice from the State Medical Department and independent physicians that the condition is 'conducive' to finishing the remaining phases of the polls.

The petition asserts that the recruitment and transportation of government employees would undoubtedly disperse the infection to regions that are less infected, and therefore requests that the State Election Commission take urgent action to postpone the remaining phases of the election. Furthermore, the Allahabad High Court's order was issued "without taking into account any evidence or figures or analysing for itself what the election procedure means," according to the plaintiffs.

The plea further states that based on numbers, that COVID-19 cases are on the rise, but warns that the real picture on the ground could be even worse. The complaint, which includes photos, claims that on (April 15 2021) , the first day of the election saw "a massive turnout of the electorate" and that "no COVID Protocols were observed," putting the lives of "voters, officers on duty, and all people with whom such a large number of people would come into touch" at risk. Against this backdrop the petitioner states,

"It is most respectfully submitted that the amid such a critical, grave and grim situation the UP-State Election Commission bluntly has proceeded further with Gram Panchayat Raj Election in accordance with notification dated (March 26, 2021) issued by the State Election Commission ignoring the risk of super spread of the virus and exposing the life of the general public."

The petition extracts a copy of the Allahabad High Court's Order in Suo motu proceedings last year wherein it stated, "We must give priority to public health over elections and Government is expected to streamline every department of public health and public care in the light of the observations made" The complainant claims that the High Court has not exercised its jurisdiction, and that there is no constitutional provision that prevents the elections from being postponed because it does not contest the election process itself. Additionally, stating that the petitioner had submitted a representation to the Uttar Pradesh State Election, which was not acted upon, the plea prays that the election is deferred till the situation stabilises. Contending that its hands are tied by the Allahabad High Court's orders, the petitioner states that only the Supreme Court would be able to provide the reliefs prayed for. CASE: Sachin Yadav v. State of Uttar Pradesh and Ors. COUNSEL: Advocate Mohd Shaz Khan, Advocate Talha Abdul Rahman