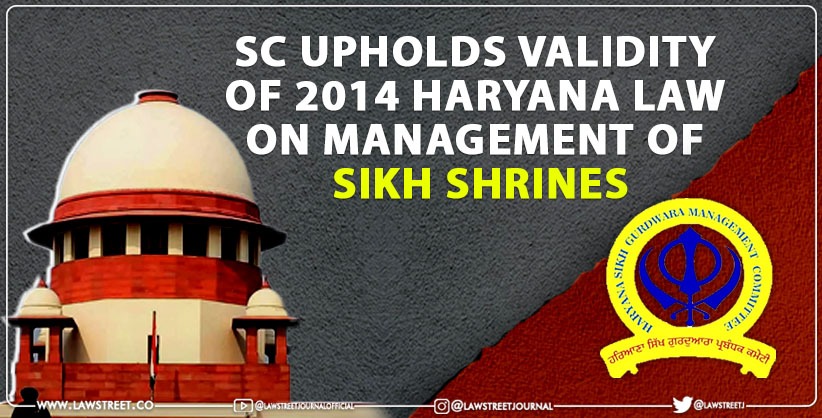 NEW DELHI: The Supreme Court on Tuesday upheld the constitutional validity of Haryana Sikh Gurdwara (Management) Act, 2014, which allowed formation of a separate committee other than the Shiromani Gurudwara Prabhandak Committee to manage affairs of Gurdwaras in the state.

A bench of Justices Hemant Gupta and Vikram Nath said since the affairs of the Sikh minority in the State are to be managed by the Sikhs alone, therefore, it cannot be said to be violative of any of the fundamental rights conferred under Articles 25 (freedom to practice religion) and 26 (freedom to manage religious affairs) of the Constitution.

"The affairs of the religious minority in the State i.e., Sikhs is left in the hands of the Sikhs alone in the same manner as was under the 1925 Sikh Gurudwara Act. The Haryana Act also provides for Haryana Sikh Gurdwara Judicial Commission in the same manner as is provided under the 1925 Act. The affairs of the Gurdwara are again required to be managed by local Gurdwara Committee," the bench said.

The then Haryana government under leadership of Chief Minister Bhupinder Singh Hooda had passed HSGMC Act in the state legislative assembly, creating a separate juristic entity for the management of historical Gurdwaras in the state.

The law was challenged by Kurukshetra-based Harbhajan Singh, also the executive committee member of the SGPC, which managed the Gurdwaras covered by the 1925 Act and spread over the States of Punjab, Haryana, Himachal Pradesh and Union Territory of Chandigarh.

The Union government, for its part, said only Parliament has the exclusive power to enact law on the said subject. There is no justification for the Haryana State Legislature to have passed a law on the same subject matter, taking away the jurisdiction of the Board constituted under the 1925 Act. It also said only Central Government could give directions with regard to functioning and operation of an inter-state body corporate, i e, SGPC.

The bench further said the 1925 Act was originally an intra-State legislation enacted by the State legislature and it subsequently became an inter-State body only by virtue of the 1966 Act.