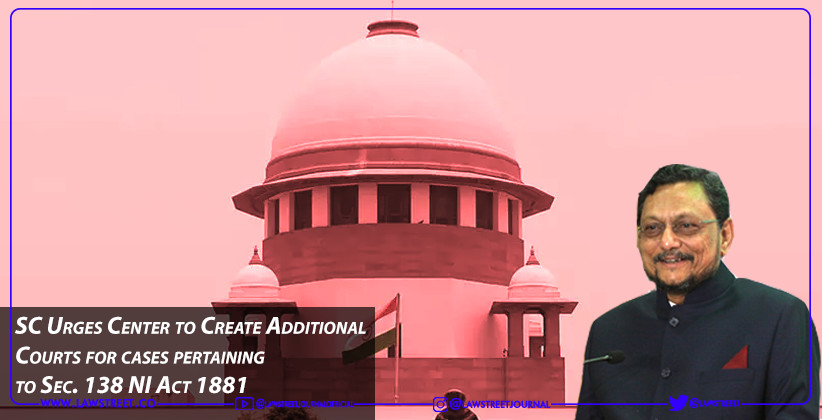 Judiciary Mar 08, 2021 Aditi Aggarwal ( Editor: Ekta Joshi ) 21 Shares
21 Shares
A Constitution Bench headed by the Chief Justice of India SA Bobde of the apex court on Thursday( March 4, 2021) urged the Central Government to consider the establishment of additional courts to deal with the “grotesque” problem of pendency of cheque dishonour cases under Section 138 of the Negotiable Instruments Act, 1881.

It has been told by the bench comprising the CJI, Justices L Nageswara Rao, BR Gavai, AS Bopanna and S Ravindra Bhat to the Solicitor General Tushar Mehta that the power under Article 247 of the Constitution to create additional courts for administration  of the NI Act is “coupled with a duty.”

Article 247 of the Constitution speaks of the power of the Parliament to provide for the establishment of certain additional courts in respect of matters under the Union List.

Dealing with a suo moto petition to expedite trial in cheque bounce cases arising out of Section 138 of the Negotiable Instruments Act, 1881, a five-judge Constitution bench of the SC felt that before introducing the law the Parliament ought to have done a judicial impact assessment. The CJI suggested that even a temporary law can be made for creation of additional courts.

The Solicitor General said that he personally felt this was a "welcome solution" but added that "wide ranging consultations" might be necessary to work out the “nitty-gritties.” Following this, the matter was adjourned till next Wednesday.

It is to be noted that Earlier, the Centre was not favoring the idea of additional courts, and the Ministry of Finance had submitted certain alternate suggestions. However, the Court yesterday told Additional Solicitor General Vikramjit Banerjee that the suggestions of the Ministry are “inadequate.”