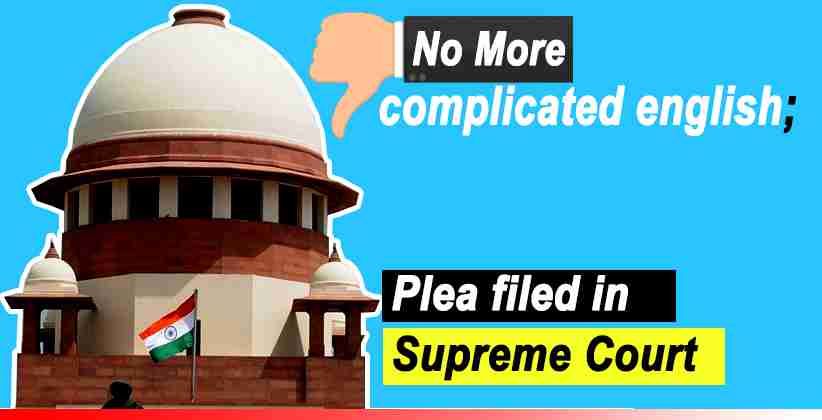 Nowadays English is an important language that is a need in every field. Our legal system also mostly uses the English language for writing as well as speaking which is sometimes very difficult for a common man to understand. Taking this into a account, a writ petition is filed by a lawyer named Dr. Subhash Vijayran under Article 32 r/w Articles 14, 21 & 39A of the Constitution of India, in the Supreme Court stating that the judiciary system should use plain or simple English to draft or communicate anything so that a common man can have access to it.

The plea states that “The writing of most Lawyers is: (1) wordy, (2) unclear, (3) pompous, and (4) dull. We use eight words to say what can be said in two. We use arcane phrases to express commonplace ideas. Seeking to be precise, we become redundant. Seeking to be cautious, we become verbose. Our writing is teamed with legal jargon & legalese.”

The plea further states that this judiciary system is for the common man which is the only body who is neglected “it is the common man who is mostly ignorant of the system – in fact quite wary of it. Why? Because he neither understands the system nor the laws. Everything is so much complicated and confusing. The way laws are enacted, practiced, and administered in our country violates the fundamental rights of the masses by denying them – Access to Justice. ‘Speedy Justice’ and ‘Legal Awareness’ are the two, out of the many, facets of Access to Justice.”

Grounds of the petition:

-As held in a catena of judgments of this Hon'ble Court, Access to Justice is a fundamental right being a facet of Article 14 read with Article 21 & 39A of the Constitution of India. ‘Speedy Justice’ and ‘Legal Literacy/ Awareness’ are facets of Access to Justice.

-For the population to access justice, they must understand their rights and the means for claiming them. For most people, the laws and the formal justice system are alien institutions they fear or do not understand. Legal awareness helps counter this misunderstanding and promote Access to Justice. Messages should be in plain language for easy understanding of the citizens.

-Because of the complicated nature of our legal system, there is a vast disparity between the haves and haves not vis-à-vis Access to Justice. The fortunate few are able to wrestle their way through the matrix of our legal system and get an early hearing – (where they even argue for hours and days on end) – while the majority has to wait for decades for their matter to be finally heard and decided by courts of law.

-Plain language is designed to ensure that the reader understands it as quickly, easily, and completely as possible. It avoids verbose, convoluted language, and jargon. Using plain language in communications ultimately improves efficiency, because there is less ambiguity for the readers, and less time is taken for clarifications and explanations. This is a step toward Access to Justice.

-Using plain language does not mean writing everything in the style of a tabloid newspaper. It means writing documents in a way that is appropriate for the audience. If a law affects people, those people should have a chance of understanding it. The language used in law should depend on who the law affects; taking account of how familiar they are with the subject.

The petitioner prayed for the following steps to be taken:

-Direct Department of Justice to issue guides/handbooks in Plain English and in vernacular – easily understandable by layman Laws of general public interest – explaining the law and procedure for the vindication of rights and redressal of grievances under the law.

-Direct use of Plain Language – easily understandable by the layman – in drafting and issuing of all government rules, regulations, notifications, communications, etc., which are of interest to the general public.

-Direct Bar Council of India to introduce a mandatory subject of “Legal Writing in Plain English” in 3-year and 5-year LL.B. courses in all Law Schools in India and,

-Pass any other or further order or orders as this Hon'ble Court may deem fit and proper in the facts and circumstances of the case in the interest of justice and to meet the ends of justice.

The petitioner also prayed that “The legislature should enact precise and unambiguous laws, and as far as possible, in plain language. A guide in Plain English and in vernacular of the laws of general public interest should be issued by the Government explaining the law and its application in easy to understand language. Further, all rules, regulations, notifications, communications, etc., drafted and issued by all branches of the Government that are of general public interest should be in Plain Language.”

And further time limits of 5-10 minutes for applications, 20 minutes for short cases, 30 minutes for cases of moderate length, and 40-60 minutes for long cases may be imposed. Only in exceptional cases of constitutional and public importance, should the time limit of oral arguments be relaxed beyond one hour.