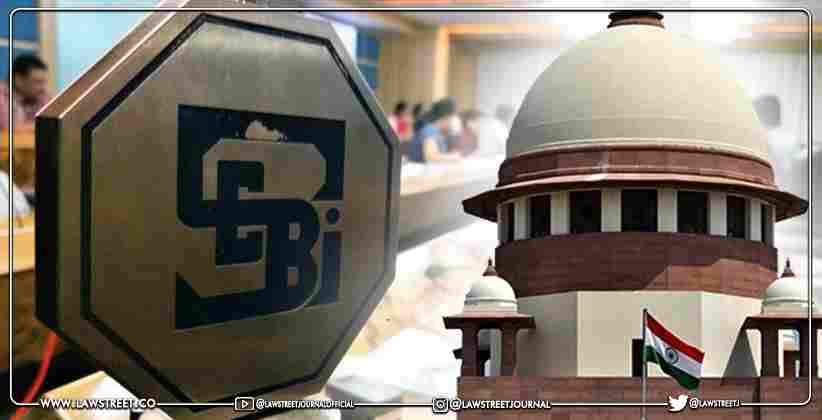 The Supreme Court on Wednesday (July 7, 2021) observed that the Securities Exchange Board of India (SEBI) is the custodian of the investors’ interest and importance needs to be accorded to its consent in compounding offenses.

“The SEBI is not a regular complainant, it is the custodian of the investor’s interests, it is a regulatory body. Great importance must be accorded to SEBI in compounding offenses. But to lift it to a point where without its consent, there can be no compounding and where the SEBI can veto any compounding, I have my doubts,” expressed Justice D Y Chandrachud.

A Bench of Justice D Y Chandrachud and Justice MR Shah was hearing a Special Leave Criminal Appeal arising out of the impugned order dated 1st April 2019, of the Delhi High Court. The said order declined the petitioner’s application under Section 24A of the Securities and Exchange Board of India (SEBI) Act of 1992. The petitioner was alleged to have artificially jerked the prices of the share of his company and when he applied for compounding of the offence under Section 24A of the SEBI Act, the Trial Court rejected his application on the ground that the respondent SEBI had refused to give their consent for compounding. [Prakash Gupta v. Securities and Exchange Board of India]

The Trial Court relied on the Supreme Court’s decision in JIK Industries Limited and Others v. Amarlal V. Jumani and Another [(2013) 3 SCC 255] where the court held that obtaining the consent of the complainant to compound an offence for the dishonor of a cheque is sacrosanct, and that cannot be wished away by Section 147 of the Negotiable Instruments Act (which says that notwithstanding anything contained in the Code of Criminal Procedure, every offence punishable under this Act shall be compoundable).

Justice Sunil Gaur of the Delhi High Court, in the impugned order, relying on the Supreme Court’s decision in Meters and Instruments Private Limited and Another v. Kanchan Mehta [(2018) 1 SCC 560] and by the Bombay High Court in N.H Securities Ltd. v. Securities Exchange Board of India [2018 SCC OnLine Bom 4040], observed that compounding at the initial stage must be encouraged, but not at the final stage. The object of the SEBI Act has to be kept in mind. The stable and orderly functioning of the securities market must be ensured. Merely because the actions of the petitioner did not result in any loss to the investors it would not be justified to discharge the accused at the end of the trial.

“It will not be in the interest of justice to discharge the accused at the final stage of the proceedings by allowing the application for compounding without the consent of SEBI Act as it will defeat the objective of the SEBI Act. Though the Adjudicating Officer has found that the alleged violation committed by the petitioner has not resulted in any loss to the investors, this by itself would not justify the discharge of the accused at the end of the trial.”, the Court said.

Section 24A of the SEBI Act provides for the composition of certain offences by the Securities Appellate Tribunal or a court before which such proceedings are pending. Compounding is essentially a settlement process by which an accused pays to compound charges in lieu of undergoing prosecution.

“Notwithstanding anything contained in the Code of Criminal Procedure, any offence punishable under this Act, not being an offence punishable with imprisonment only, or with imprisonment and also with fine, may either before or after the institution of any proceeding, be compounded by a Securities Appellate Tribunal or a court before which such proceedings are pending.” reads Section 24A.

Justice M.R Shah observed that compounding is analogous to plea-bargaining and although SEBI’s consent is not an absolute necessity for the compounding of an offence, SEBI being a regulatory body its concerns have to be heard.

“Compounding has the effect of acquittal, it has the effect of dropping the charges. But compounding means that you are admitting the charges, you are admitting the guilt that you have done the offence, and on paying a certain amount, you are let go. Compounding is like plea-bargaining. Even if the consent of SEBI may not be a sine qua non for the compounding of an offence, but its concerns have to be heard. Its voice has to be heard if the court is permitting compounding or even if the court is imposing any additional conditions”, said Justice Shah.

Agreeing with him, Justice Chandrachud added “And the SEBI is not a regular complainant, it is the custodian of the investor’s interests, it is a regulatory body!”

Expressing his concerns about SEBI having the veto power to compound an offence, Justice Chandrachud stated “Compounding is the mirror image of a compromise in civil law. Great importance has to be accorded to SEBI in compounding offences. But to lift it to a point where without its consent, there can be no compounding and where the SEBI can veto any compounding, I have my doubts.”

Referring to the statements made in the impugned order, Justice Chandrachud remarked “In the facts at hand, if we finally decide that no case for compounding is made out, then we may only add a line that the fact that SEBI has refused its consent for compounding need not be gone into. But if we say that the offense in the present case can be compounded, then we will have to squarely deal with the issue.”

He further noted that the power of compounding under Section 24A has to be exercised in the public interest and the spirit of the Act. The objects of the SEBI Act are to protect the investor’s interests and to ensure a stable securities market. The courts will have to consider whether in exercising the power of compounding, the Act would be defeated.

The Bench then observed the arguments made before the Supreme Court in an appeal against the decision of the Bombay High Court wherein the court held that the consent of SEBI is needed to compound offences under Section 24A. The Senior Counsel in this appeal submitted that if the appellant paid the liable amount, SEBI would not have any problem compounding the offence. The Court was inclined to compound the offense on the payment of the aforesaid amount. The Bench was also informed that the Delhi High Court has also, in another matter, held consent to be mandatory.

Reserving its judgment, the Bench clarified “We make it clear that we have not commented one way or the other on the larger questions to be raised by the appellants.”

Securities and Exchange Board of India (SEBI)SEBI