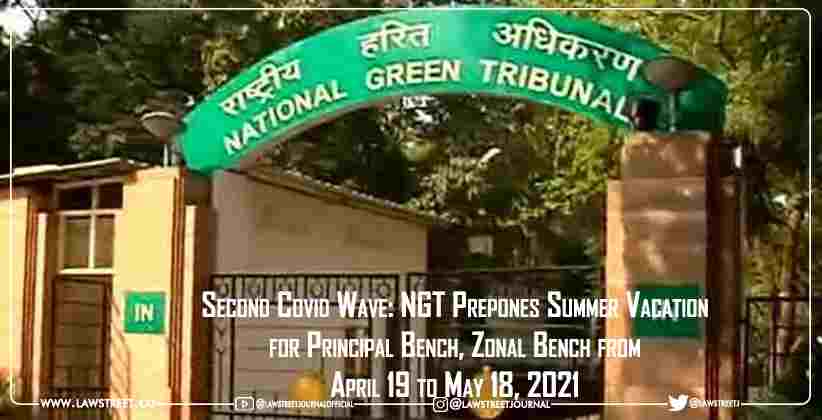 A modification in this year’s calendar for summer vacation was noted in the National Green Tribunal, in light of the recent hike in COVID-19 cases throughout the country.

NGT has ordered the competent authority to prepone the summer vacations from 19th April to 18th May from the earlier notified schedule of 1st to 30th June.

The registrar general of the tribunal it should the office order dated 15th April 2021 as follows:

“In the light of sudden an exponential surge and COVID-19 cases, the competent authority has pleased to modify the calendar with respect to summer vacations to be observed by all the benches of National Green Tribunal. The earlier notified summer vacation from first June 2021 to 30th June 2021 stand cancelled and shall be working for the National Green Tribunal. In lieu of the same the period from 19th April 2021 two 18th may 2021 both inclusive shall be observed as summer vacations for all the benches. That is history shall however remain functional during this period.”

It is also provided in the order that E filing of cases during the said period shall be operational and urgent matters may be taken up for hearing by the Tribunal according to the decision of the competent authority, upon evaluation of the reasons for urgency narrated by the parties.

Moreover, the order states that request for change of the date of the matter, if required, can be made by the parties, leading counsel, at least three days in advance, by sending email to judicial-ng@gov.in, after obtaining consent or objection of the opposite party/parties in writing as per the pro-forma for seeking adjournment, which shall be considered by the competent authority.