Home Judiciary There Is No Provision in Law to Serve Summons Through WhatsApp: Kerala HC [READ ORDER]
Judiciary 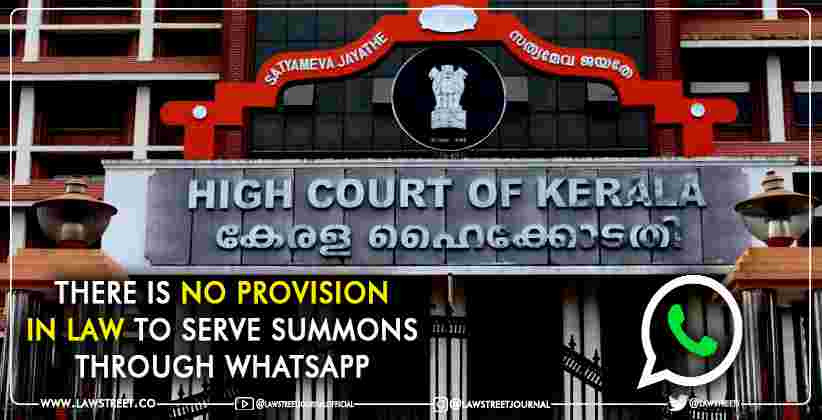 The Kerala High Court while hearing a Criminal Miscellaneous Case filed by Anoop Jacob, a Member of Legislative Assembly of Kerala, observed that the provisions of the Code of Criminal Procedure, 1973 does not allow for service of summons through WhatsApp.

The matter was heard by a single-Judge Bench of the High court comprising Justice V.G.Arun.

The matter related to a criminal case pending against the MLA before the Additional Chief Judicial Magistrate (Special Court for Cases related to MPs/MLAs), Ernakulam. In this case, the MLA is accused of offences under Sections 143 (Unlawful Assembly), 147 (Rioting), 149 (Unlawful Assembly), 269 (Negligent act likely to spread infectious disease), 271 (Disobedience to quarantine rules) and 188 (Disobedience to rules promulgated by public officials) of the Indian Penal Code, 1860 and other offences under state statutes for organising protests ignoring the COVID-19 lockdown rules.

After the accused MLA failed to appear for hearing the Additional Chief Judicial Magistrate issued a non-bailable warrant.

The High Court referred to the provisions related to the service of summons in the Code of Criminal Procedure, 1973 as given in Sections 62 and 65.

The court stated that:

“The above provisions do not provide for service of summons through WhatsApp. No doubt, the revolutionary changes in the field of communication calls for a more pragmatic approach regarding the mode and manner of service of summons.”

The court referred to several judgements of the Supreme Court where newer methods of serving summons like the use of speed post and e-mail have been allowed. But the court refrained from considering WhatsApp messages as an appropriate mode of serving the summons.

“In the case at hand, the summons is stated to have been issued through WhatsApp, which is not an accepted mode of service. As such, the court should not have issued non-bailable warrant against the petitioner on the assumption that he had failed to appear after receiving the summons.”

The judgement gains significance as WhatsApp and other messaging apps have found extensive use in the virtual mode of operation of the judiciary during the pandemic.