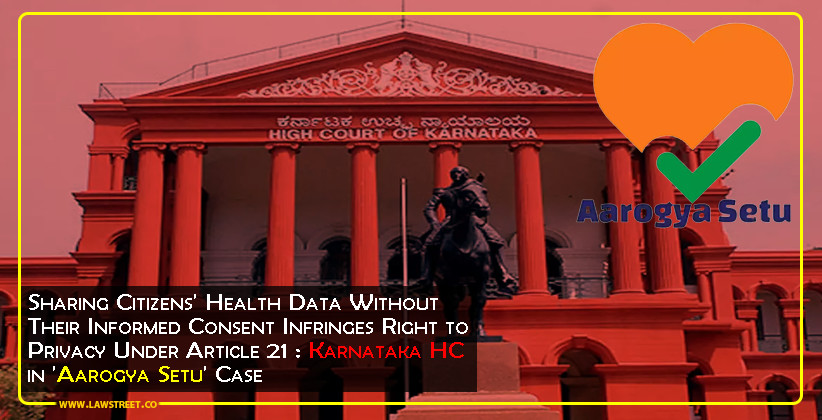 The Karnataka High Court, in its interim order restraining the Government of India and National Informatics Centre (NIC) from sharing the response data of users of Aarogya Setu app, observed that sharing of health data of citizens without their informed consent will violate right to privacy under Article 21 of the Constitution.

Accordingly, the court passed an interim orderr to restrain the Central Government and the National Informatics Centre(NIC) from sharing the response data given by an individual in the 'Aarogya Setu' app with other government departments and agencies, without obtaining informed consent of the users.

The court examined the additional affidavit filed by the Central government in which mention of the order dated 11th May, 2020 issued by the Chairperson, Empowered Group on Technology and Data Management by which, the Aarogya Setu Data Access and Knowledge Sharing Protocol 2020 has been introduced.

The Court has given liberty to the Centre to seek vacation of the order by filing an affidavit showing that informed consent of users for sharing theresponse data has been obtained.

Education in the State Has Been Taken as a Business or an Industry to Sell the Degrees: Allahabad High Court [READ ORDER]