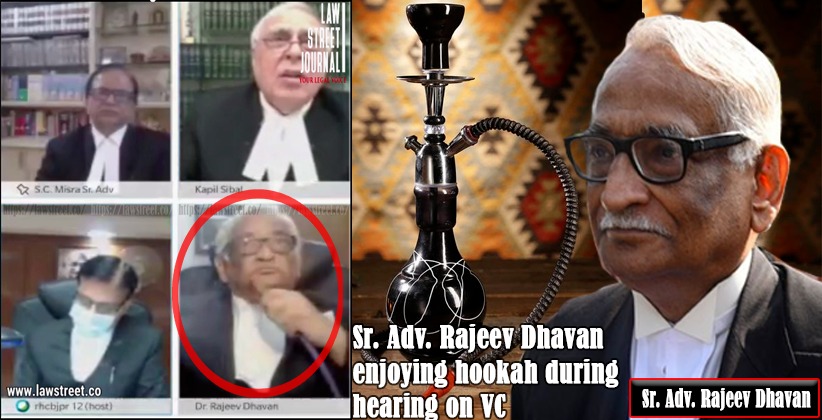 ‘A dignified code of Conduct’ is of utmost importance in a lawyer’s life. Senior members of the bar are especially vocal about it and leave no stone unturned while pointing out professional etiquettes or the lack of it amongst junior lawyers. However, in a classic fail of the ‘Practice what you Preach’ mantra, senior advocate Rajeev Dhavan was recently caught smoking hookah in the middle of a virtual hearing.

The incident took place as the Jaipur Bench resumed proceedings on the plea challenging the merger of six BSP MLAs with the Congress. The video clip, now viral on social media, shows Advocate Dhavan smoking hookah behind a set of documents held before his face. The clip also shows Senior Advocate Kapil Sibal arguing the matter, while Advocate Dhavan nonchalantly continues to puff on his hookah.

The video has led to a series of arguments amongst the legal fraternity. While few have expressed disgrace over the act, others have raised questions about the clip itself, stating that it is against the court rules that ban the recording of legal proceedings. It is yet to be known, if the clip has come to the notice of the Rajasthan High Court and if any action is purported to be taken against Advocate Dhavan.

Since the advent of the pandemic and the subsequent shift to virtual court proceedings, the Supreme Court has time and again stated that the members of the legal fraternity should observe a ‘minimum code of conduct’ during online hearings. In a June 15 order, the apex court had held, "This court is of the view that when counsel appears in court video hearings, they should be presentable and avoid showing images, which are not appropriate and can only be tolerable in the privacy of their homes."

What are your views on the incident? Let us know in the comments!