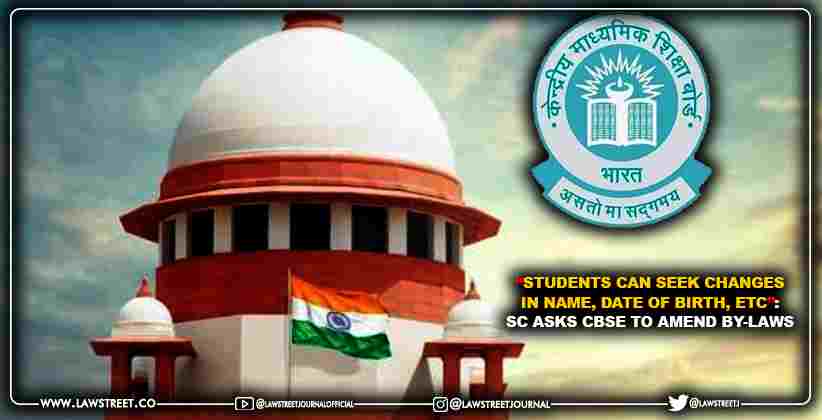 The Supreme Court of India stated that the students of CBSE (Central Board of Secondary Education) can seek change of their names, date of birth, etc. in their school certificates. A three-judge bench of Justices AM Khanwilkar, BR Gavai, and Krishna Murari delivered the verdict on petitions challenging the CBSE by-law which prohibits students from correcting names in their school certificates.

Students can also seek changes in their parents’ names and can apply for changes with documents like passport, Aadhar card, etc., added the Court.

The bench stated, “The limitation as regards maximum period up to which changes can be permitted also requires a different approach. Upon receiving the certificates, the student would naturally be put to notice of the particulars of certificates. Due to young age and inadvertence including being casual and indolent, a student may fail to identify the errors or to understand the probable impact of those errors and accordingly, may not apply for rectification immediately. It is also possible that a student may not have to use the certificates immediately after passing out and by the time she uses them, the limitation period for correction may elapse.  Therefore, a realistic time for permitting corrections is very important. Indeed, it can be commensurate with the statutory or mandatory period up to which CBSE is obliged to preserve its old record.”

The Court stated that there’s a merit in CBSE’s argument that frequent changes cannot be permitted as there is scope of abuse and misuse, apart from administrative burden. However, it added that, mere possibility of an abuse cannot deter the Board from fulfilling their essential functions.

Furthermore, the court issued guidelines for recording corrections and changes in CBSE certificates, observing “name is an intrinsic element of identity.”