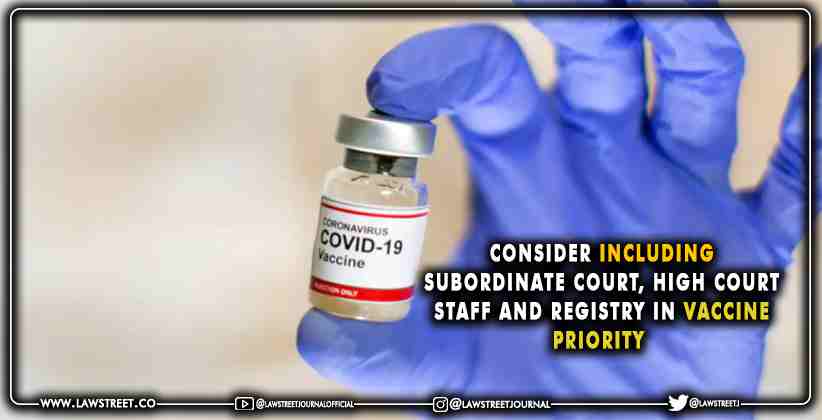 The Kerala High Court asked the state government to consider adding the court staff and the registry at the high court and those on the the subordinate level on their priority list for vaccination.

A Bench of Justices K Vinod Chandran and MR Anitha took up a petition asking that advocates and advocates clerks be considered in the vaccine priority list.

In the petition, filed by Advocate Benny Antony Parel through Advocates Saiby Jose Kidangoor, K Anand, Sibha S, Parvathy Vijayan, Mohammed Salih PM, and T M Muhamed Hafees, the applicant asserted that lawyers are bound to meet to people, hear their complaints face to face, peruse the reports related to the case and placing same before the respective courts.

"In this manner, like doctors and police, the legal counselors likewise had the right to be treated as Front line workers by the government on account of Covid Vaccination and treatment for Covid related illnesses", he said.

His plea consequently seeks for the following directions -

The Plea also requested that the Court direct the Center and State to pass proper orders on the applicant's email representation pending the write request's disposal.

After hearing the plea, Justice Vinod Chandran said that the state government could take the matter up with the advocates and advocates clerk, get a list of people effectively working during the lockdown, and include them in the priority list.

Justice Chandran continued to remind the state that it had enlisted and effectively immunized its workers.

The Court proceeded to express that even advocates were filling cases physically and the staff was going to Court consistently amid the pandemic.

The Court said to the state government, "They are also your representatives, however by the Constitution of India we (High Court) exercise jurisdiction...Lawyers and judges are protected to some extent, sitting through VC… but the staff is coming every day."

It was added that, “we would like to do it (inoculation) for the Registry and Subordinate Courts,"

Justice Chandran also asked the State to reply on this aspect and stated that it would pass a request on the issue during the day.