Home Judiciary Sec 17 CPC: Suit In Respect Of Different Properties Can Be Filed In Any Of The Courts Having Jurisdiction If Cause Of Action Is The Same Says SC
Judiciary

Sec 17 CPC: Suit In Respect Of Different Properties Can Be Filed In Any Of The Courts Having Jurisdiction If Cause Of Action Is The Same Says SC 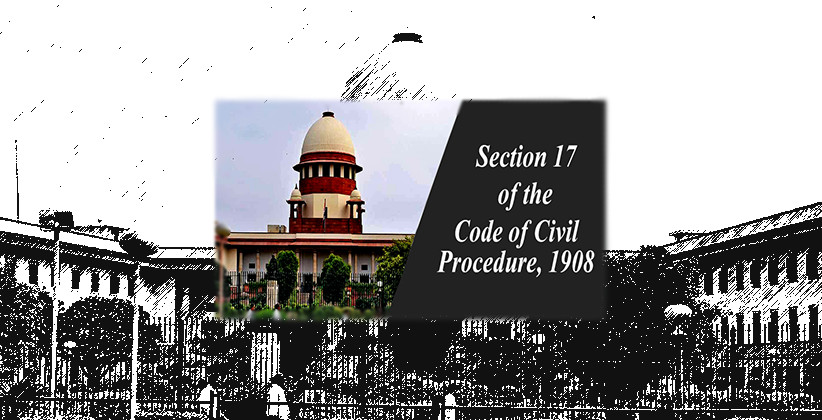 Thereby, enlarging the scope of Section 17 by allowing an application to be filed even in those cases where the suit is concerning different properties situated in different jurisdictions. Provided, the suit is based on same cause of action with respect to the properties.

Section 16 of CPC contains the general principle that suits are to be instituted where the immovable property is situated. Section 17 engrafts an exception by stating that if portions of a property are situated in different jurisdiction, the suit can be instituted in any of the courts having jurisdiction over such portions.

The landmark judgment was passed by a Division Bench of Justices Ashok Bhushan and K.M. Joseph on an appeal filed against the judgment passed by the Madhya Pradesh High Court dismissing the writ petition of the appellant.

In this case, a civil suit was initiated seeking partition of joint family properties after setting aside certain documents of conveyance. The suit was instituted in a civil court at Indore. However, properties situated at Mumbai were also scheduled in the plaint.

The Trial Court struck off the properties in Mumbai scheduled in the plaint stating that the properties were outside the court's territorial jurisdiction. The plaintiff challenged this order in the Madhya Pradesh High Court which turned down the challenge saying that Section 17 of CPC cannot be applied to a scenario of more than one property located in different jurisdictions.

Referring to Section 13 of the General Clauses Act, 1897, the court said: "We are also of the same view that the word "property" used in Section 17 can be more than one property or properties.”

The court said that its reasoning was fortified by Section 39 (1)(c) of the CPC, which indicates that a decree passed by a court can deal with immovable properties situated outside its jurisdiction.

On the observations made, the court concluded the following:-

Coming to the facts of the case, the Bench noted that the suit was arising out of different causes of actions pertaining to different documents executed by different defendants.

Therefore, the appeal was dismissed, affirming the findings of the High Court and the Trial Court.

Read the judgment below