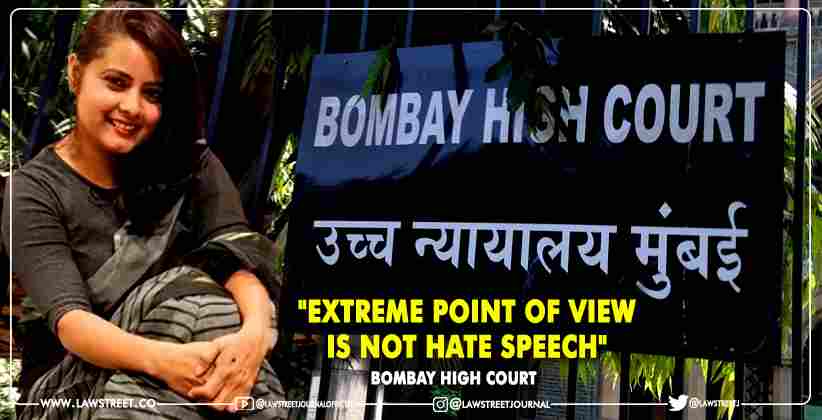 The Court revoked an FIR registered against Sunaina Holey under the provisions of Section 153A of the Indian Penal Code (IPC) for allegedly reposting a video on social media with a tweet which created enmity between two religious’ community.

If the point of view is extreme, that doesn’t necessarily mean that it is always a hate speech, the Bombay HC stated on Wednesday (May 5, 2021) while referring to a tweet with alleged communal parts to it.

The Court quashed an FIR registered against Sunaina Holey under section 153A of the IPC for allegedly reposting a video which allegedly created tension between two religious’ communities.

The Bench consisted of Justices SS Shinde and MS Karnik. It stated that the tweet in reference seems to be a hostile point of view. The state’s approach is rather on the hypersensitive and cautious side thereby finding Holey’s tweet problematic.

The Court further observed that the right to express one’s views is protected and held dear in our democracy and system. Merely because the point of view of a certain individual is hostile, the Court cannot declare the tweet as a hate speech. The court states that from a single glace over the tweet, there are no religions or communities named.

“By no stretch of imagination can it be said that the tweet created hatred or tension between the two communities,” it stated.

Holey was not the author of the video and there was no offence registered against the actual author of the video. Her repost and statement in the post was an expression of her opinion criticizing the person in the crowd who blamed Prime Minister Narendra Modi for the outbreak of the COVID-19 pandemic, and merely a disapproval to an opinion.

The Court found that the act of FIR was too far and remote. The Court finds it difficult to determine whether Holey has mens rea to commit the alleged offence under section 153A of the provision (IPC.)

“State wants us to go through a lot of things, which are unclear in nature, and come to the conclusion that an offence under section 153A IPC is made out,” the Court stated.

It expressed its gratitude and appreciation for the police for taking the necessary steps to pacify crowds and keep a diligent watch in social media platforms to ensure that the equilibrium is maintained.