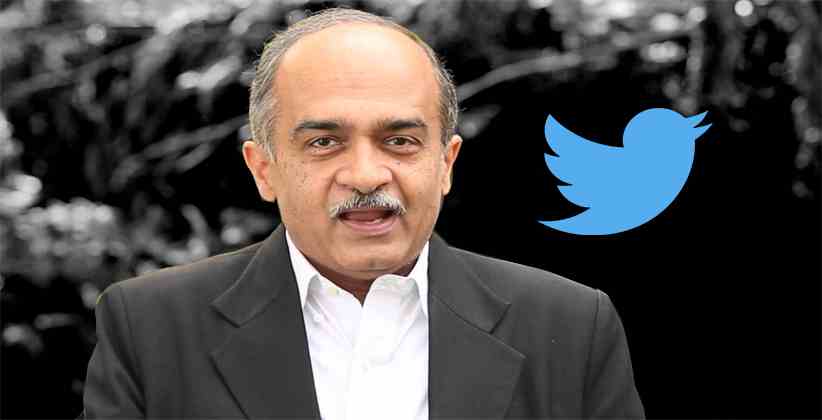 The Supreme Court of India registered a suo moto ‘contempt of court case’ against Prashant Bhushan and Twitter India. The case is listed before a Supreme Court bench comprising of Justices Arun Mishra, B R Gavai, and Krishna Murari on Wednesday, 22nd July 2020. As per the records of the Supreme Court, the case is seen registered at 3:48 pm on Tuesday, 21st July 2020, and is numbered as SMC (Crl) 1/2020. The cause of action on suo moto case proceeding is yet to be known. A contempt case registered in 2009 against Prashant Bhushan and Tarun Tejpal who is a former editor of Tehelka magazine is also listed before the same bench to be heard on Friday, 24th July 2020. The case relates to certain comments made by Bhushan in an interview to Tehelka magazine against former Chief Justice of India S H Kapadia.

On Wednesday, 22 July 2020, the Supreme Court issued a notice to seeking his response on why any action should not be taken against him for tweeting such serious allegations against the judiciary. The Supreme Court also asked Twitter India as to why it did not remove Mr. Bhushan’s tweets when a contempt action became evident. Contempt proceeding has also been started against Twitter India. The Indian arm of the microblogging website said it will convey the top court's message to its parent Twitter Inc.

Last month, Mr. Bhushan alleged the judiciary had a hand in dealing with damage to democracy. In an order dated Tuesday, 21st July 2020, the Supreme Court said, “Prashant Bhushan's tweets undermine the dignity and authority of the Institution of the Supreme Court and the office of the Chief Justice of India in the eyes of the public.” The Supreme Court asked the Attorney General to aid the court in this issue, noting that the correct party in this situation is Twitter Inc, based in California, and not Twitter India. The Three-Judge bench of Justice Arun Mishra, Justice BR Gavai and Justice Krishna Murari then allowed the social media company to file a petition that it felt was appropriate for the matter.

The Supreme Court took up contempt proceedings on its own against Mr. Bhushan for two tweets. On 27th June 2020, Prashant Bhushan accused the Supreme Court of playing a part in the "destruction of India's democracy" in the last six years. He tweeted, “When historians in the future look back at the last 6 years to see how democracy has been destroyed in India even without a formal Emergency, they will particularly mark the role of the Supreme Court in this destruction, and more particularly the role of the last four CJIs.”

His second tweet, on 29th June 2020, Bhushan posted a photograph of CJI S.A. Bobde sitting on a Harley Davidson motorcycle in Pune along with the text “CJI rides a 50 Lakh motorcycle belonging to a BJP leader at Raj Bhavan Nagpur, without a mask or helmet, at a time when he keeps the SC in Lockdown mode denying citizens their fundamental right to access justice!”

The Supreme Court stated, “A petition was presented before us for contempt proceeding on the administrative side. We have gone through the petition and the allegation against CJI SA Bobde. The tweet in question was tweeted on June 27... We issue a notice to the Attorney General. We also note that the correct party here is Twitter Inc of California and not Twitter India. Twitter permitted to file an appropriate application.”

The Court will hear the matter on 5th August 2020.