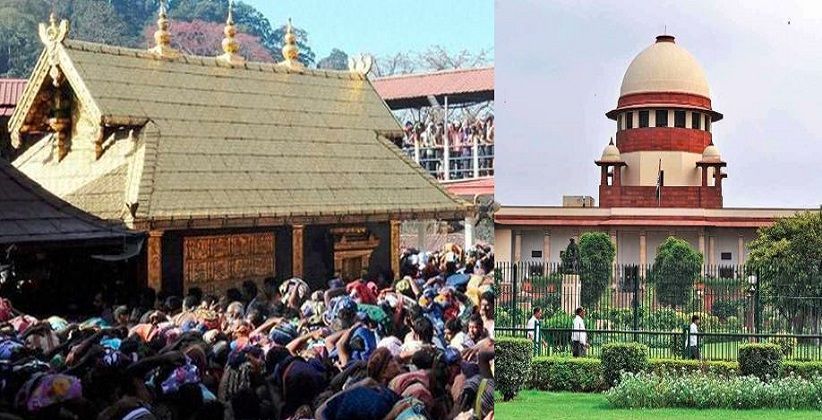 The Supreme Court today (September 28, 2018) by 4:1 majority has struck down Rule 3(b) of the Kerala Hindu Places of Public Worship (Authorisation of Entry) Rules, 1965, to allow entry of women, irrespective of their age, into the Sabarimala Ayyappa temple in Kerala.

A Constitution Bench of Chief Justice Dipak Misra and JusticesRohinton Nariman, AM Khanwilkar, DY Chandrachud, and Indu Malhotra held that Rule 3(b) of 1965 Rules which bars entry of women between the ages of 10 and 50 years into the Sabarimala temple is a clear violation of right of Hindu women to practice religion under Article 25 of the Constitution of India.

The Bench delivered four judgments, CJI Misra wrote a judgment on behalf of himself and Justice Khanwilkar, Justices Chandrachud and Nariman wrote a concurring judgment each, while Justice Malhotra wrote a dissenting opinion.

CJI Misra held in his judgment that Rule 3(b) is ultra vires the 1965 Act under which it was framed because the bar of entry of women between the age of 10 and 50 years is not an essential part of the religion.

“Devotees of Ayyappa do not constitute a separate religious denomination,” CJI Misra said.

Justice Nariman concurring with CJI Misra held that the custom of barring entry of women into Sabarimala Temple is violative of Article 25(1) of the Constitution of India.

(b) Women at such time during which they are not by custom and usage allowed to enter a place of public worship.”

To give effect to the said mandate, the Kerala government had issued notifications barring women between the age group of 10 to 50 years from entering Sabarimala temple.

In consequence, a petition was filed in the Supreme Court in 2006 by Indian Young Lawyers Association seeking the lifting of the ban on entry of women into the temple.

On March 7, 2008, the matter was referred to a three-judge Bench of Chief Justice Dipak Misra and Justices R Banumathi and Ashok Bhushan but came up for hearing seven years later, on January 11, 2016.

During the hearing, the Kerala government had changed its stance on the issue three times.

The Left Democratic Front (LDF) government, which was in power in Kerala when the petition was filed in 2006, had chosen not to oppose the petition and had filed an affidavit supporting the entry of women into the temple.

Subsequently, when the case had come up for hearing in January 2016, the United Democratic Front (UDF) government, which was in power filed an affidavit supporting the ban.

When the LDF government again returned to power in 2016, it initially said that it will support the ban on women. However, later it changed its stand and told the Court that they are ready to allow the entry of women into the temple.