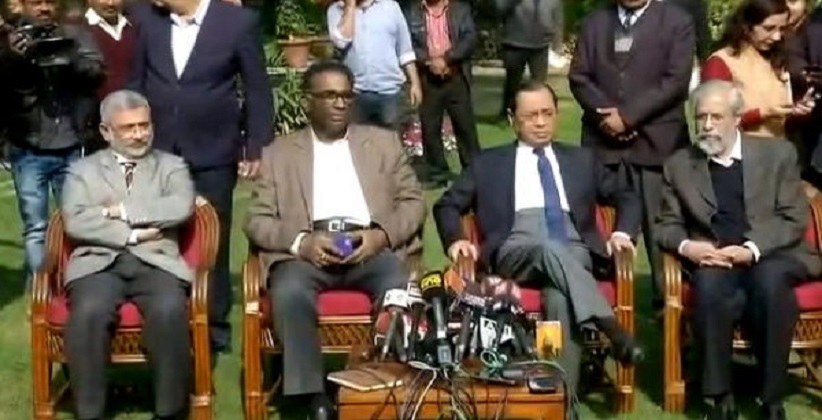 Four senior Supreme Court judges held a press conference today where they expressed their resentment with the Chief Justice Of India and showed concern over the alleged sorry state of administration of the apex court.

The press conference, held by Justices J. Chelameswar, Ranjan Gogoi, MB Lokur, and Kurian Joseph, has laid bare the ongoing tension between the four justices with the Chief Justice of India, Dipak Misra. They have allegedly accused the CJI of ignoring their suggestions take remedial steps on several matters. The four judges, along with chief justice Misra, are part of the Supreme Court collegium that selects judges to the apex court and high courts.

This is an extraordinary event in the history of any nation, more particularly this nation, and an extraordinary event in the institution of judiciary ... It is with no pleasure that we are compelled to call this press conference. But sometimes administration of the Supreme Court is not in order and many things which are less than desirable have happened in the last few months, said justice Chelameswar.

Justice Chelameswar added, we tried to persuade the CJI to take steps but failed. Unless the institution of Supreme Court is preserved, democracy wont survive in this country.

Justice Chelameswar mentioned that he met CJI along with other senior judges with a specific request but were unable to convince him.

A letter released by the judges where they penned their anguish and dissatisfaction with issues such as justice delivery system and allocation of cases.

There is an issue of assignment of a case which is raised in that letter (to the CJI), said justice Gogoi.

On being asked if it is about special CBI judge BH Loya, he said, Yes.

The remarks came after as the Supreme Court today took up the matter for consideration petitions requesting for an independent probe in the death of judge Loya who was hearing the Sohrabuddin Sheikh fake encounter case of 2004, in which various police officers and BJP president Amit Shah.

There have been instances where a case having far-reaching consequences for the nation and the institution had been assigned by Chief Justice of this court selectively to benches without rational basis. This must be guarded against at all costs, says the letter by the judges. We are not mentioning details only to avoid embarrassing the institution but note that such departures have already damaged the image of this institution to some extent.

Justice Gogoi, who will be succeeding chief justice Misra in October, said, a discharge of debt to the nation which we have done.

Asked whether they wanted the chief justice to be impeached, Justice Chelameswar said: try to put words in my mouth.