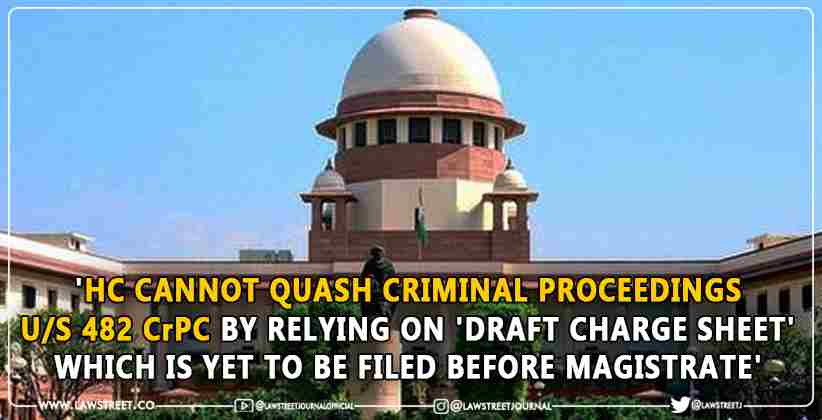 In a significant verdict, the Supreme Court on Friday (November 12, 2021) held that the High Court cannot rely on a “draft charge-sheet”, which is yet to be filed by the police before a magisterial court, to quash criminal proceedings. It further stated that it is “trite law” that high courts must exercise its inherent powers “sparingly and with circumspection”.

The verdict came on a criminal appeal filed against a decision of the Gujarat High Court which on January 8, 2019, had quashed an FIR against several persons, accused of extorting money from the purchasers of a plot at Rajkot.

The high court, which had permitted the police to continue with the prosecution of two accused out of a total of nine, had directed the police to file the draft charge sheet before the filing of the same in the magisterial court and after perusal, quashed the FIRs against some of the accused.

A bench comprising Justices DY Chandrachud and BV Nagarathna held in its verdict that the Gujarat High Court “transgressed the limitations” while exercising its inherent power under section 482 of the Code of Criminal Procedure in quashing the FIR.

“We have come to the conclusion that the High Court transgressed the limitations on the exercise of its jurisdiction under Section 482 of the CrPC in quashing the FIR and all consequential proceedings. There has been a clear abuse of the process before the High Court. We accordingly set aside the impugned judgment and order of the High Court dated 8  January 2019 and allow the Criminal Appeals,” the judgement stated.

Referring to various verdicts, Justice Chandrachud, writing the judgement for the bench, said, “it is trite law that the High Court must exercise its inherent powers under Section 482 (power of high courts to quash criminal cases) sparingly and with circumspection.”  The bench distinguished between two legal positions and said that high courts must take into consideration the material collected during the investigation by the police after the charge sheet is filed before the magisterial court while deciding petitions seeking quashing of FIRs under section 482 of CrPC.

“However, the High Court cannot place reliance on a ‘draft charge-sheet which is yet to be placed before the Magistrate to quash the criminal proceedings under Section 482,” the bench said in its 27-page verdict.

The verdict, while referring judgements, said the High Court can neither direct an investigating agency to submit the investigation report before it nor can it quash a criminal proceeding under Section 482 relying on such a report when the report has not been submitted to the Magistrate.

Referring to the factual position of the case, the top court said the Gujarat High Court bench, in its interim order of May 2, 2016, had allowed the investigation to continue against the accused but directed that the final report cannot be submitted to the Magistrate without its permission.

“The direction was not supported by any reasoning whatsoever. Even at the interim stage, the High Court must demonstrate an application of mind and furnish reasons for issuing any interlocutory direction, which is capable of being tested before this Court in an appropriate case", it noted.

“The interim direction amounted to an unnecessary interference in the investigative process envisaged under the CrPC. The High Court transgressed the scope of the powers conferred upon it by restricting the police from submitting the charge-sheet before the Magistrate and by further perusing the contents of the ‘draft charge-sheet in the proceedings before it,” it said.