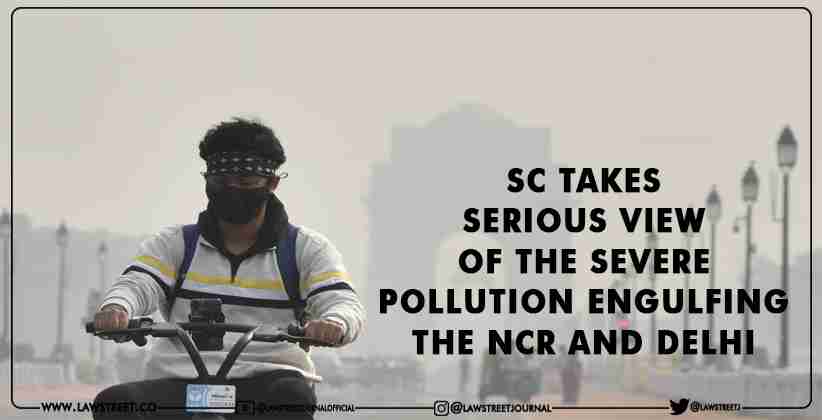 SC takes serious view of the severe pollution engulfing the NCR and Delhi and said if needed declare two day lockdown to bring the pollution caused by vehicles, cracker, industries and dust.

SC said stubble burning has to be tackled in a longterm measure. But, emergency measures are to be taken without states and the Centre playing politics or blame game over it.

SC said the schools have opened in Delhi and in this weather little children will be exposed to severe pollution conditions. "We want urgent measures to be taken and in two three days time the pollution should reduce," the CJI-led bench said.

SC said urgent measures are to be taken after solicitor general Tushar Mehta said the ambient air condition may turn to emergency levels. SG said that emergency meeting of the Centre and state governments are scheduled for this afternoon.

Supreme Court suggests lockdown in Delhi for a couple of days to curb the levels of pollution in the capital. “How will we live otherwise?” CJI asks the authorities.

Justice Chandrachud: Schools have reopened now. Little children are out on the streets at 7 in the morning. We are exposing them to this. It can’t happen!

Supreme Court tells the Centre and the Delhi govt to take emergency measures in view of alarming level of Air Pollution in the National Capital Region.

SC posts the matter on Monday seeking their response to the situation.

Supreme Court suggests Centre, Delhi may consider imposing a lockdown of two days in the national capital in view of the high pollution levels.

It adds farmers alone can't be blamed for the rising pollution levels over stubble burning.

Supreme Court adds that the authorities must deal with other causes of pollution, including vehicular pollution, dust and industrial pollution.

SC asks Centre to call an emergency meeting of all the stakeholders, and fixed Monday for hearing the matter next.

SC asked Centre to ask Punjab and Haryana to stop stubble burning for at lease two days to bring down pollution as SG said that the situation may not improve till November 17.

Delhi government says the major contribution to Delhi's severe pollution levels is because of stubble burning. SC says Delhi government has the habit of blaming farmers.

SC says instead of blaming the farmers, all states and the Centre should come together to address the pollution issue.

SC said Delhi government has opened the schools and little children are being exposed to severe air pollution. "Have you taken any step to close the schools or address the situation? What happened to the smog towers you were to put up? Are they working," the SC asked.

SC asked the Centre to inform on Monday the decisions taken to address the emergency situation caused by air pollution.