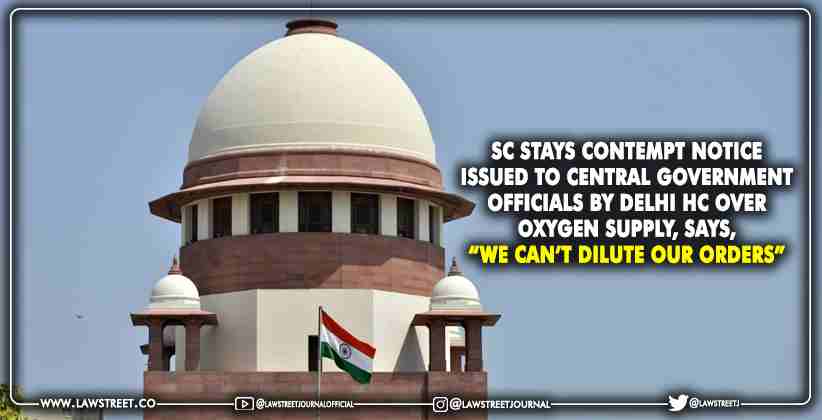 On Wednesday, May 5th, 2021, the Supreme Court, in staying the contempt notice issued to the central government officials by the Delhi High Court regarding supply of 700 MT of oxygen per day to NCT of Delhi, directed the central government to follow the order of the Supreme Court provided on April 30th, to ensure the supply of oxygen to Delhi until the exercise of carrying out an expert audit to scientifically access the actual requirement of oxygen in the city is conducted.

The bench comprising Justices DY Chandrachud and MR Shah opined that the conduct of audit is a matter for consideration of another bench which is hearing Suo moto COVID matter and until such audit is conducted, the court is ‘answerable to the residents of Delhi’.

The bench also stated that in the wake of the current situation, to furnish the officials an opportunity to place a tabulate statement before this Court and submit a comprehensive plan before the court by 11:00 am on Thursday, May 6th, 2021 indicating the manner in which the direction for the allocation of 700 MT of LMO to Delhi shall be complied with.

Justice Chandrachud observed during the hearing that the 500 MT allocation for Delhi was not sufficient. The judge made this remark after the Solicitor General said that Delhi will be able to manage with 500 MT.

"According to me, if they have 500, they will be able to manage. We don't have unlimited oxygen, we will have to rationalize", the SG said.

"No, we cannot dilute our own order like this...Institutionally, we can't accept this. Our order was for 700 MT. We cannot go behind it. We are answerable to citizens. We don't know what is happening on the ground with the 550 MT. We are not in touch with private citizens as much as you are. Our friendships are limited. But the lawyers are saying every day, 'Do something. We are dying'. We cannot just go by the number of beds (to determine the O2 requirement). There are patients outside hospitals also and at their homes who have been unable to secure a bed .We have to look at the practical requirement. 550 is not resolving the problem of Delhi. What we do subsequently after the scientific audit is for another day.”

After hearing the submission of the learned counsel as well as  Ms Meenakshi Arora and Mr Jaideep Gupta, learned Senior Counsels, who have appeared as Amicus Curiae, the court observed that the comprehensive plan of the officials should indicate the sources of supply, provisions for transportation and the logistical arrangement necessary to ensure the fulfilment of the requirement of NCT of Delhi in terms of order of the Supreme Court.