Home Judiciary SC to hear plea by Adv. Ehtesham Hashmi on the undesrible action of police, in Tripura Riots
Judiciary

SC to hear plea by Adv. Ehtesham Hashmi on the undesrible action of police, in Tripura Riots 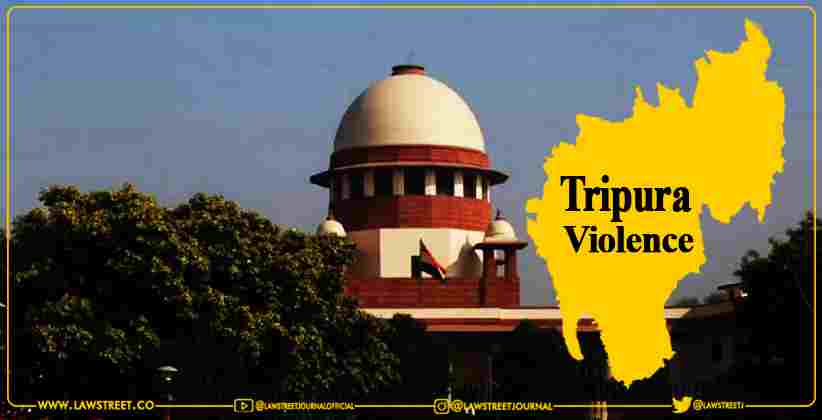 Supreme Court to hear plea by advocate Ehtesham Hashmi who contended that he had personally visited riot affected areas of Tripura & that instead of taking action against the miscreants and rioters, the police took action against those who spoke against the same

Adv Prashant Bhushan: this is the Tripura communal violence matter there are two prayers in this. there was serious communal violence where mosques were burnt. we prayed for an independent probe in violence against muslim community

Bhushan: we are asking for a SIT due to partisan behaviour of the tripura govt and the state police. for long time they denied that there was communal violence. then they targeted people who reported this by registering UAPA cases

Bhushan: now in status report filed before HC there has been admission on some aspects. CM went on saying that mosques were not burnt etc.

Justice Chandrachud: Is the HC seized off the matter?

Bhushan: that is a suo motu matter?

Bhushan: the HC is not going into inaction by the state govt

SC: if the hc is seized off the matter at the moment our taking up the case now will be an expression of no confidence in one of our high courts. we should wait for the outcome.

Bhushan: HC is not on laxity or complicity on part of the state. The reason why we seek an SIT is because...

SC: Please give us a compilation of orders of the High Court

DYC J: The proceedings before the HC is suo motu. you said HC is dealing with some aspects and may be because they have been apprised that something is pending before us and they want to interfere

Bhushan: they are on compensation from the beginning

SC: We will give you permission to intervene and assist the High Court and let the HC look into the matter being raised by you here.

Bhushan: The petitioner is a lawyer based in Delhi. Police has been threatening these people and there are UAPA cases

SC: We will protect you and you can participate in a video conferencing process.

Bhushan: Please ask the HC to look at it expeditiously.

SC: If you are aggrieved by any order, we are here to correct it

SG Tushar Mehta: I wish and hope that Mr Bhushan show the same alacrity for such violence in other states. I leave it here.

Sr Adv Mahesh Jethmalani: there are alarming social media posts. At least let the petitioner come and assist the police and answer the questions

Bhushan: I can show what the police is doing

SG: I can also show the social media posts. advocate practicing here is no ground to bypass HC

SC: HC has undertaken suo motu exercise under Article 226 of the constitution. we have an order passed by the division bench of HC order and reproduces the genesis of the suo motu petition.

SC: HC is seized off the suo motu proceedings. having regard to the above position we are of the view that it would be apt that issue sought to be highlighted by the petitioner is raised by the petitioner before the HC by filing a suitable intervention application.

SC: So that HC can take considered view. In view of the apprehension expressed by the petitioner, we without expressing opinion on merits, we permit the petitioner to make a request before the Chief Justice of HC by video conferencing and such request be appropriately considered.

SC:  We accordingly dispose off.

Bhushan: please protect us in case we have to go there

SG: Then he would also not post any inflammatory posts

SG: please also say that our contentions also be kept open, We will also raise issues with intention of petitioner

SC: we clarify that if the petitioner approaches physically before the HC then no coercive step will be taken by tripura police or no steps which precipitate his access to justice.

SC: the HC is requested to dispose off the case expeditiously. All rights and contentions to remain open.

SC asks the petitioner seeking an independent and impartial investigation by the SIT into the incidents of violence against the Muslim community in Tripura, to approach the Tripura HC as it is seized of a similar matter. Grants liberty to this effect.

SC also directed the police not to take any coercion action against petitioner-Ehtesham Hashmi, who is a Delhi-based lawyer. He expresses apprehension of arrest by the police.

Navjot Singh Sidhu urges Supreme Court to not punish him any further in the 33yrs old road rage case.