Home Judiciary Recap 2021: Here's a look at the ten most important judgements of the year
Judiciary

Recap 2021: Here's a look at the ten most important judgements of the year 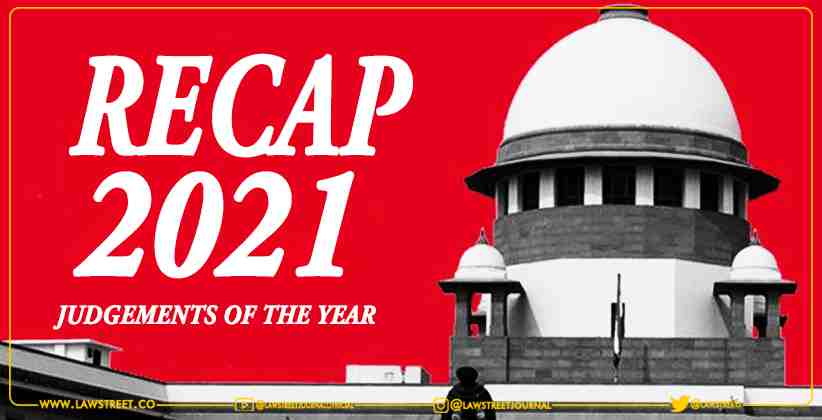 Judgment- Consent of family is not needed once two adults decide to marry.

The Hon'ble Supreme Court observed that educated younger boys and girls are choosing their life partners, which is a departure from traditional norms of society. The consent of the family or the community, or the clan is not necessary once two adult individuals agree to enter wedlock and their consent has to be piously given primacy.

Judgment- Juvenile offenders under 18 years and above 16 years to be remitted to jurisdictional Juvenile Justice Board.

In this case, the Hon'ble Supreme Court considered to what extent could the benefit under the Juvenile Justice Act, 2015 be extended where the offender was above 16 years and less than 18 years of age on the day the offence was committed. The Court held that in such a case, even if the accused were guilty, the matter must be remitted to the jurisdictional Juvenile Justice Board.

In this case, the Election Commission of India filed a petition to restrain media from reporting oral remarks that are made by the judges in Court. This came after the Madras High court remarked that ECI is responsible for the 2nd wave of Covid and should be booked for the charge of murder. The Apex Court held that freedom of speech and expression also extends to reporting the proceedings that happen in courts, including oral observations made by judges.

"Article 19(1)(a) covers freedom of press. Freedom of speech and expression covers freedom to cover court proceedings too...Now people are more digital-oriented and hence look to the internet for information. hence it would do no good to prevent a new medium to report proceedings. Constitutional bodies will do better than complain about this," the Court said.

The Apex Court held that Section 304-B of the IPC must be interpreted keeping in mind the legislative intent to curb the social evil of bride burning and dowry demand. The Bench, therefore, laid down guidelines for Dowry Death trials in the lower courts.

The Hon'ble Supreme Court held that dying declarations are admissible in evidence on the principle of necessity as there is little hope of the maker surviving. Dying declaration can form the basis of conviction if recorded in accordance with law, and if it gives a cogent and plausible explanation of the occurrence, it can be relied on as a solitary piece of evidence to convict the accused.

Judgment- 'Right not to be deported' is concomitant to Article 19 and available only to Indian citizens.

The Hon'ble Supreme Court, while hearing a case challenging the decision to deport Rohingya refugees, held while fundamental rights under Articles 14 and 21 are available to all persons whether citizens or not, the 'right not to be deported' is ancillary or concomitant to the right to reside or settle in any part of the territory of India guaranteed under Article 19(1)(e) and is available only to citizens.

Judgment- Reservation for the Maratha community.

A Constitution Bench of the Supreme Court struck down the Maratha reservation quota and held there were no exceptional circumstances justifying the grant of reservation to the Maratha community in excess of 50 percent ceiling limit as laid down in the Indra Sawhney judgment. The Hon'ble Supreme Court held that Maharashtra State Reservation (SEBC) Act, 2018 (Maratha Reservation) constituted.

The Hon'ble Supreme Court also laid down a triple test to be complied with by the State before reserving seats in local bodies for OBCs.

The three conditions prescribed are:

(1) To set up a dedicated Commission to conduct a rigorous inquiry into the nature and implications of the backwardness of local bodies within the State;

(2) To specify the proportion of reservation required to be provisioned local body-wise in light of recommendations of the Commission; and

(3) In any case, such reservation shall not exceed an aggregate of 50% of the total seats reserved in favor of SCs/STs/OBCs taken together.

Judgment- Bail in UAPA cases where undertrial accused has been subjected to prolonged imprisonment.

Emphasizing on the right to a speedy trial under Article 21 of the Constitution, the Hon'ble Supreme Court allowed the grant of bail to an accused who had spent over five years in jail as under trial in a case under the Unlawful Activities Prevention Act (UAPA).

The Apex Court accepted that there was a bar under Section 43D(5) of UAPA against the grant of bail. However, the Court made it clear that the provision does not oust the jurisdiction of constitutional courts to grant bail on the grounds of violation of fundamental rights.

Judgment- No 'Sexual Assualt' if there is no skin-to-skin contact even with sexual intent.

A 12-old girl was taken away by the accused to his house under some false pretexts. The accused pressed the girl's breasts and even tried to disrobe her dress. At that very moment, the mother of the girl reached the spot and rescued her daughter. A complaint was then made by the mother to the police station. At the Trial Court, the accused was convicted under Section 354, 363, and 342 of IPC and Section 8 of The Protection of Children from Sexual Offences Act, 2012 (POCSO Act) and was sentenced to three years of imprisonment for sexually assaulting a minor girl. Being aggrieved, the accused filed an appeal before the Nagpur Bench of High Court Bombay for acquittal of the charges under Section 8 of the POCSO Act.

The High Court modified the order of Sessions Judge and acquitted the accused from the charge of sexual assault under Section 8 of the POCSO Act and upheld the conviction under Section 354 of IPC. The Court observed that the prosecution did not make a case that the accused removed the dress of the girl child before molesting her, and as such, there was no physical contact, i.e., skin to skin with sexual intent without penetration. The judgment received a huge backlash from different communities citing it would set a 'dangerous precedent. Later, the order was stayed by the Hon'ble Supreme Court.

5% GST on your Online Food Orders