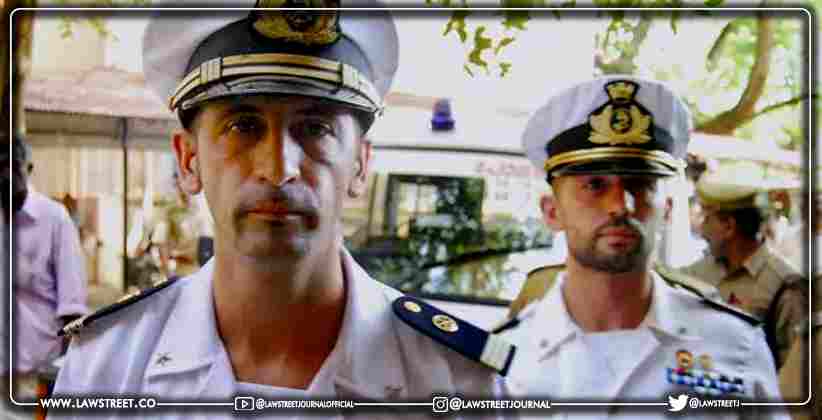 On Friday (April 9, 2021), the Supreme Court said that the Republic of Italy has agreed to pay ₹10 Crores as compensation or killing  two Indian fishermen of Kerala Coast should be deposited with the Government of India and after that, the  mount would be transferred to the Supreme Court's account.

The apex court said that the case against the two Italian Marines who had shot dead two Indian fishermen will be closed only after the amount reaches the Supreme Courts account.

The Bench headed by Chief Justice of India SA Bobde has stated that "We will ask for the amount of compensation to be deposited in this court." It said that the case will be closed only after the amount is received.

The direction came after the  Supreme Court was informed that the Italian Government would pay the amount of ₹10 crores in terms of an award by the International Tribunal.

As stated by the Republic of Italy, through a particular account specified by MEA, the amount of compensation in terms of the award passed on May 2020 will be paid by Italy to India. The Court ordered that after the amount is received,such amount should be transferred to the Supreme Court account within ane week.

The Central Government is represented by the Solicitor-General Tushar Mehta. He had submitted that " Indians are the best negotiators" and that India has "negotiated a good deal".

Eight months ago the Apex Court was informed by the Center about its decision to "accept and abide" by an International Tribunals award stating that the Marines, Salvatore Girone and Massimiliano Latorre should be tried in Italy.

As explained by the Government, being the party to the UN Convention, India was bound by the award of the Arbitral Tribunal formed under the United Nations Convention for the Law of the Sea. As India was party to the convention the award was "final and without appeal".

The two Indian fishermen were shot dead by Girone and Latorre who were onboard the Italian Ship " Enrica Lexie".  Thinking they were 'Pirates' they allegedly shot the two fishermen.

TheUN Tribunal had held that the Marines had violated the freedom of the Right of Navigation of India. For the loss of life, India is entitled to compensation.

The Tribunals finding that the Marines had immunity came seven years after the Center was directed by the Supreme Court to "proceed with the investigation and trial of Marines".

The Center was ordered by the Supreme Coury to set up a Special Court to try the case. Before the orders of the Apex Court, the High Court too had found that the Marines enjoyed no immunity.

However, in 2014, the Marines successfully obtained a stay order from the National Investigation Agency from Investigation. After one year, the Apex Court has concluded its case and is awaiting the decision of the International Tribunal for the Law of the Sea.

Vaccine for all?: PIL in SC demands immediate steps

“Public Streets should not be blocked”: Supreme Court on Noida resident’s plea