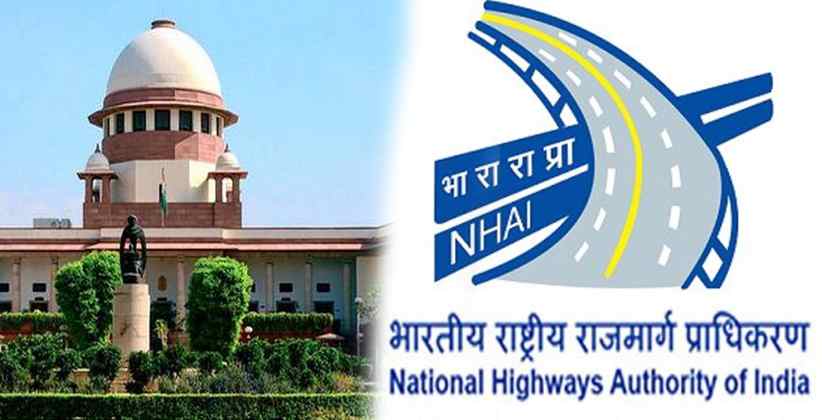 The Supreme Court of India has held the National Highway Authority of India (NHAI) liable for illegal mining and upheld the Judgment given by National Green Tribunal Board. The Apex Court asked the NHAI to compensate the legal representatives of a woman and her daughter who died in an accident while traveling on National Highway (NH).

On 6th June 2013, Vishakha and Sanskruti were traveling through an NH when over-mining resulted in the destruction of a small hill by the side of the NH. The resultant debris and a part of the hill collapsed and slid down to the road, claiming the lives of mother and daughter.

After this, the Pune bench of National Green Tribunal (NGT) on an application by Aam Aadmi Lokmanch before this court noted that the accident is a result of the illegal mining and activities by one Rathod. The Tribunal observed that NHAI and Rathod are jointly liable to pay the legal representatives of deceased a compensation of Rs 15 lakhs.

The NHAI contended before the SC that there was no material on record to establish that the NHAI was in any way culpable or had failed to perform a public duty or neglected to avert a foreseeable calamity. The Tribunal said that their neglect or omission of the NHAI was contrary to law.

The apex court considered whether NHAI cares for the users of the highway.

The court said while framing the issues noted, “The question is whether the NHAI, which indisputably owns and controls the highways, and on whose behalf it was constructed, and for which the maintenance and operation agreement was entered into, led to a duty of care, to the users (of the highways).”

“Having regard to the duty imposed on the NHAI by the virtue of Sections 4 and 5 of the Highways Act, read with Section 16 of the NHAI Act, there can be no manner of doubt that the NHAI was responsible for the maintenance of the highway, including the stretch upon which the accident occurred. The report of the sub-divisional officer clearly shows that inspection reports were furnished to the NHAI shortly before the incident, highlighting the deficiencies; also, the NHAI’s correspondence with Rathod, and the local administration; reveal that it was aware of the danger and likelihood of risk to human life, and the foreseeability of the event that occurred later. Further, letters addressed by the local administration and the NHAI to Rathod similarly show that it was incumbent upon him to take remedial action. The failure of the NHAI to endure remedial action, and likewise the failure by Rathod to take measures to prevent the accident, prima facie, discloses their liability.”

The bench rejected the challenge against the NGTs jurisdiction, the bench observed that there was a violation of Environment Protection Act because Rathod’s mining lease covered an area over 5 hectares; it fell in the regulatory notification of 2006. As given in the said notification environmental clearance is necessary even if the extraction is for less than 5 hectares. The court said after observing various provisions of NGT the court directed to pay compensation, “having regard to the damage to public health, property, and environment.”

“The court is of the considered opinion that the expression “environment” and “environmental pollution” have to be given a broader meaning, having regard to Parliamentary intent to ensure the objective of the EPA. It effectuates the principles underlying Article 48A of the Constitution of India. The EPA is in essence, umbrella legislation enacting a broad framework for the central government to coordinate the activities of various central and state authorities established under other laws, such as the Water Act and Air Act. The EPA also effectively enunciates the critical legislative policy for environmental protection. It changes the narrative and emphasis from a narrow concept of pollution control to a wider facet of environment protection. The expansive definition of environment that includes water, air, and land and the interrelation which exist among and between water, air, and land, other human creatures, plants, micro-organisms, and property indicate the wide powers conferred on the Central Government. A wide net is cast over the environment-related laws. The EPA also empowers the central government to comprehensively control environmental pollution by industrial and related activities. For these reasons, and given the above discussion, it is held that the NGT correctly assumed jurisdiction, having regard to the nature of the accident in the facts of this case.”