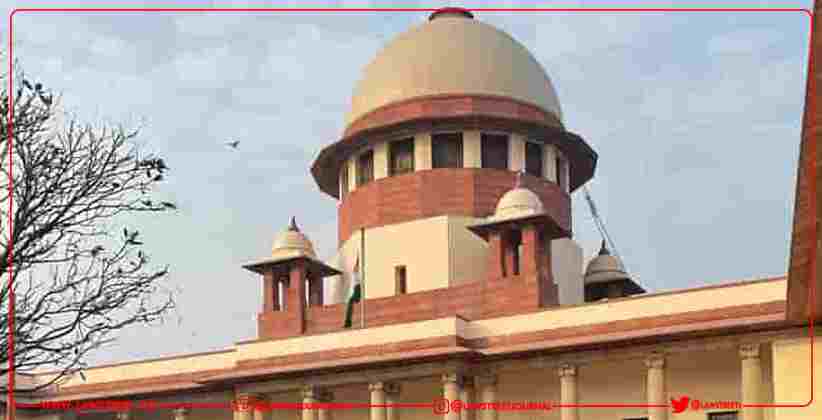 The submissions made by the National Spot Exchange Limited (NSEL) was partly heard by the Supreme Court, which was represented by the Senior Advocate Mukul Rohatgi in a batch of petitions filed by the State of Maharashtra and the NSEL Investors Action Group, which challenged the order passed by the Bombay High Court and which observed that the National Spot Exchange Limited (NSEL) was not a Financial Establishment within the purview of the Maharashtra Protection of Interest of Depositors in Financial Establishment Act 1999.

A bench consisting of Justices DY Chandrachud, Surya Kant and Bela M Trivedi continued hearing the matter for the final disposal on Tuesday.

The bench consisting of Justices Smt. Bharati H Dangre andRanjit More, the Bombay High Court held that National Spot Exchange Limited (NSEL) was not a ‘financial establishment’ since it did not accept any deposits, as defined under the Maharashtra Protection of Interests of Depositors in Financial Establishments Act, 1999. It was held by the court that NSEL was a commodities exchange where commodities were traded between willing buyers and sellers acting through their brokers. It was also observed by the High Court that, “the EOW finding the entire money trail to the defaulters, the State attached properties of 63 Moons, which was not legally sustainable.”

The Senior Advocate Rohatgi represented the investors of the NSEL and the wholly subsidiary of 63 Moons Technologies Ltd.

Submissions Made On Behalf Of The Counsel Of NSEL, Wholly Subsidiary Of 63 Moons Technologies Ltd:

The Senior Advocate Rohatgi – I will only talk on admitted facts and not on disputed facts. I am promoter and NSEL is defunct that was running commodity exchange. It is an exchange where people buy commodities for e.g. from mandi my lord like purchasing of dal, chawal etc.

The Senior Counsel Rohatgi explained the nature of business of its company by stating that – ‘A commodity exchange is a platform. I am an exchange and I am neither seller nor a buyer. In commodity exchange, it has brokers just like stock exchange. Brokers are accredited just like stock exchanges. Brokers represents sellers and buyers. There may be number of warehouses’.

‘The money actual passes from buyer through broker through my exchange to seller, I don’t retain any money, made further submission by NSEL.

Our act Maharashtra Protection of Interests of Depositors in Financial Establishments Act, 1999 is different from the Tamil Nadu Act, states the NSEL Counsel.

I don’t issue bank FDR – nor I charge any interest submits Senior Advocate Rohatgi for NSEL.

Further, Mr. Rohatgi argues – In my case, and it’s nobody’s case that I take deposit with promise of return. I only get commission from my business.

The Short point in this litigation whether I am covered by provision of MPID Act [Maharashtra Protection of Interest of Depositors (In Financial Establishments) Act, 1999], argued the Senior Counsel Rohatgi.

To which J. Chandrachud submits the then former Chief justice of India Altamas Kabir reiterated the view about legislative competence of the Act.

Also Mr. Rohatgi says – I’m not on legislative competence of the Act. there are traders who engages brokers on both sides.

My lord, I will explain concept of ‘Pairing’ argues Sr. Counsel Rohatgi.

Justice Bela stated, “ As far as my understanding is concerned, it is not necessary that transaction should be between same parties.”

Also Justice Chandrachud cited an instance on day zero, A sells 1000 kg pulses to B. The transaction is between B AND C.

On the paper, there is no loan transaction ,further submissions in continuation of arguments Rohatgi.

My employees turned blind eye on the transactions,  my accounts were attached, submitted Advoacte Rohatgi.

Justice Bela to the Senior Counsel Rohatgi – So you have not challenged vires of act ?

Further, Rohatgi argued that the Order 37 cannot be applied summarily.

Pursuant to report, Bombay High Court passed various decrees against those fellows and not against ME (NACL).

Rohatgi- Some guarantees are also taken from brokers also.

Rohatgi reads out the appeal filed by Maharashtra Govt. Further, he also mentioned the allegations levelled by the complainant Pankaj  Ramnaresh Sharaf, wherein upon his complaint an FIR got registered under Section 120B read with Sections 409, 465, 467, 471, 474 and 477(A) of the IPC.

The Complainant alleges of default of Rs 5600 crore as if it was his money.

Justice DY Chandrachud interrupted in between and submitted to NSEL – ‘But you were participant In criminis.’

Meanwhile, Rohatgi reads out certain paragraphs from the challenged judgment of the Bombay High Court.

J. Chandrachud said, ‘You had to put some restrictions.’

To which Rohtagi replied, “ All brokers are accused, not even me is involved, I am accused in the case as they are also. I cannot be prosecuted under the charges levelled against me.”

Also, Advocate Rohatgi stressed upon the main issue that whether the accounts remain attach for indefinite period?

Just because I am a financial establishment who receives deposit, the accounts/properties merely cannot be attached on this ground – Rohtagi.  No criminal liability made out, submitted Senior Counsel Rohatgi. Also, he said that no EOW is against him.

Advocate Rohtagi stated that he attacked provisions of the act and so the notifications and It’s a civil death for 63 moons.

What can come against me is the judgment delivered by former Justice Katju.

Rohatgi referred to the judgment of the Bhaskaran and submitted that this case cannot and should not be treated as precedent.

In Bhaskar case also, It is a simple case of deposit of money, submits Rohatgi.

That nothing to do with commodity exchange, submitted  Mr. Rohatgi while taking reference of BHASKARAN CASE

Mr.Rohtagi stated: “In Bhaskaran case, this court made constitutional slip, Tamilnadu case was only on legislative competence but observations were not on Bombay Act.”

The petition was filed and it challenged the Constitutional validity of Sections 4 and 5 of the Maharashtra Protection of Interest of Depositors in Financial Establishments Act, 1999  being violative of Article 14, 19 and Article 300A of the Constitution and also to levy of attachment of assets of the company by 6 notifications issued by the state by invoking the powers conferred on the authority under the said enactment.

It is submitted that one of the subsidiaries of the 63 moon, National Spot Exchange Ltd. (NSEL) and 63moon hold 99% shares of NSEL.

The NSEL had launched the contracts for buying and selling of commodities on its trading platform with different settlement periods ranging from T+0 days to T+36 days. The word ‘T’ denotes the Trade date i.e. the day on which the trade took place and ‘+0’ or ‘+36’ is referred to as number of business days after which the delivery of commodity and payment of price therefor, was to be affected by the Buying Trading Member and Selling Trading Member.

The NSEL was charged with violation of the terms and conditions of the Exemption Notification dated June 5th, 2007 since complaints were received from a number of depositors against NSEL and it was alleged that as a Financial Establishment it had collected money by promising attractive returns to the depositors, but there was a failure to return the deposits when the time for repayment came.

A FIR came to be registered in 2014 under Section 120B read with Sections 409, 465, 467, 471, 474 and 477(A) of the IPC wherein it was alleged that by unilaterally closing down the Exchange, the NSEL defaulted in repayment of approximately Rs 5600 crore which was due to be paid to approx. 13,000 investors. Since the NSEL did not have sufficient money or property to return the deposits or make payment of interest or render services against which the deposits were received in terms of Section 4 of MPID Act, 1999, thus, the petitioners were held liable to attach the properties.

Economic Offences Wing of Mumbai Police who was subsequently investigating the matter, had filed 3 charge sheets but not a single rupee has been traced by money trail to the petitioner as a promoter not the petitioner was named as an accused. The High Court relied on the Carona Limited v. M/s. Parvathy Swaminathan and Sons had concluded that the NSEL is not a Financial Establishment and therefore, the petitioner who is a promoter of the said establishment cannot be proceeded under the provisions of MPID Act. Hence, we are constrained to quash and set aside the action to which the petitioner is subjected to by taking recourse to the provisions of MPID Act.