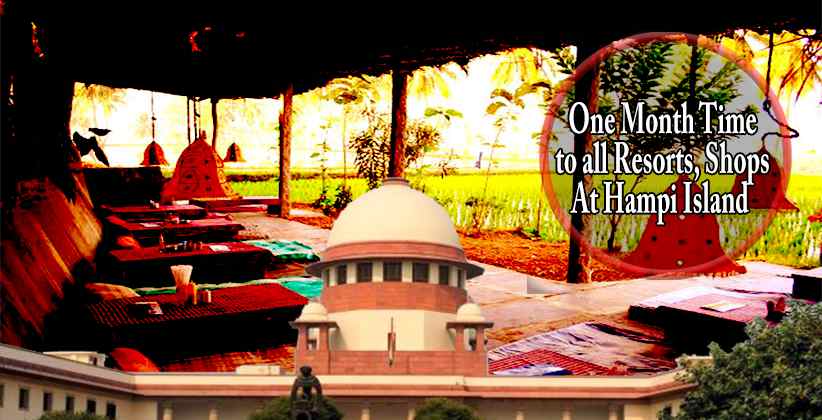 The Supreme Court on 11th of February, 2020 has ordered the district administration of the Koppal district to evict around 70 resorts and other structures on Hampi Island, Karnataka within one month. The encroachments at Virupapura Gaddi in Gangavati Taluk are to be evicted. The Special Leave Petition was filed in 2015 by the resort owners on the Virupapura Gaddi in Kopal district. The Supreme Court has said that the respondents shall proceed with the demolition of the illegal structures that have been directed by the applicants in the district.

Around 70 structures have been built illegally on the revenue part of the island. A few sections of the structures were brought down when they were discovered by the Forest Department of the Reserve Forest area of the Island. In 2018, the Department managed to evict structures on the 280 acres of the area situated on the island. This area has now been fenced and plantation work has been started.

In 2009, the Hampi World Heritage and Area Management Authority, Archeological Survey of India and District Administration had sent notices for ordering the eviction of the structures on the island. The resort owners questioned the move and moved the High Court of Karnataka.

Meanwhile, in 2016, the Forest Department managed to evict structures on 280 acres of the area of the island. The area has now been fenced and plantation work has been taken up. Since the site had been a tourist attraction for a long time, a number of hotels and resorts came over the years but were built illegally. These hotels repeatedly faced charges of engaging foreign visitors in several illegal activities. The local people in the Anegundi district and surrounding villages demanded their eviction.

Several efforts had been taken by the district administration to evict them but the owners of the hotels and resorts maintained a good rapport with political power that helped them drag on the case for all these years.

"We shall seek assistance from the legal team to check we can appeal over the court's order. The owners are confused and we will be meeting the administration officials soon," said a resort owner from Virupapura island, who with several other owners has been shocked by the Apex Court's sudden decision.